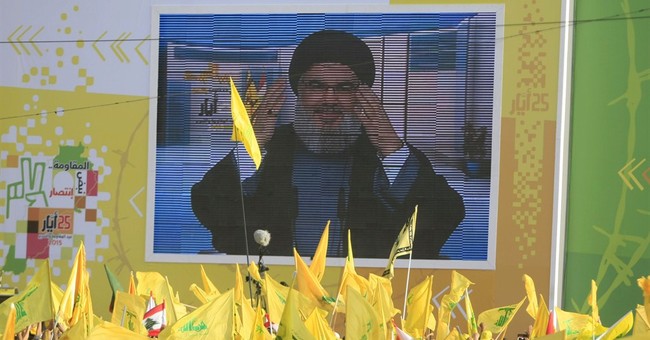 And just when you thought that the Obama foreign policy couldn't get any worse:

Newly disclosed documents reveal that the Obama administration quietly decided in April to cut funds for Hayya Bina, a leading anti-Hezbollah group in Lebanon, “due to a recent shift in Department of State priorities in Lebanon,” according to a letter notifying the group of the funding cuts.

Soon after this move, the United States announced that it would deliver a slew of new weapons to the Lebanese Armed Forces (LAF), which has come under intense criticism for its close relationship with Hezbollah and its efforts to bolster the group’s activities in Syria.

The State Department even wrote in a letter that Hayya Bina's efforts to "foster an independent moderate Shia voice be ceased immediately and indefinitely."

The Free Beacon has more on the details of the arms sales:

On Wednesday, the State Department marked the delivery of more than 200 TOW-II missiles and “dozens of launchers to the LAF,” according to a statement issued by the U.S. Embassy in Beirut.

The military hardware cost more than $10 million and was jointly funded by the United States and Saudi Arabia, according to the State Department.

Around $82.5 million in weapons and ammunition have been provided to the LAF since August 2014.

Additionally, the Pentagon announced this week that it is considering selling Lebanon six A-29 Super Tucano aircraft and support equipment as well as logistical support.

The sale is estimated to cost $462 million, the Pentagon said.

And just to get an idea of how close the LAF is with Hezbollah:

The LAF is “basically protecting Hezbollah’s rear and flank on the Lebanese side of the border, which in turn allows Hezbollah to run its operations more freely across the border in Syria,” said Tony Badran, a research fellow at the Foundation for Defense of Democracies (FDD) who first broke the news of the anti-Hezbollah funds being cut.

“They are essentially acting as an auxiliary force for Hezbollah in Lebanon,” he said, adding, the LAF has “taken on the role of securing the same areas Hezbollah is trying to secure. There’s an overlap and it goes to help sustain Hezbollah’s effort in Syria.”

Just a reminder that the leader of Hezbollah, Hassan Nasrallah, once said: "If all the Jews gather in Israel, it will save us the trouble of chasing them down around the world."

So naturally we need to embolden Hezbollah in order to appease Iran, a country that hangs gays, murders journalists and persecutes Christians and Jews. Ironically, this also emboldens Syrian President Bashar al-Assad, who Obama wanted to remove from power only two years ago.