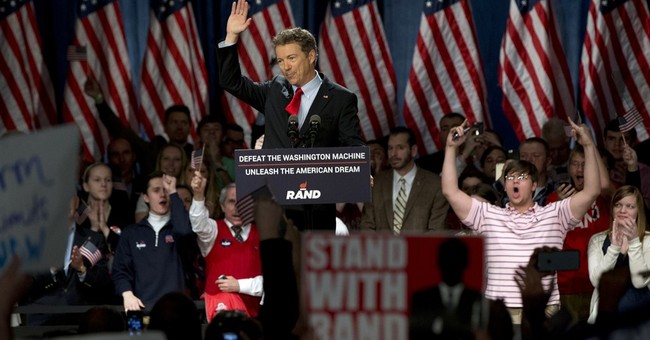 Tuesday afternoon, Sen. Rand Paul (R-KY) officially announced his bid for the White House in 2016. But since his 2013 filibuster brought him into the conservative limelight, he’s been killing it with the millennial crowd.

Approximately 36 percent of eligible voters in 2016 will be a part of the millennial generation, according to a study from the Center for American Progress. For any candidate, winning over the hearts of young and passionate Americans will be key.

“My generation is not comprised of the traditional electorate, and Rand Paul is not a traditional politician,” said a college student who spoke at Paul’s announcement rally in Louisville Tuesday.

Paul has already made waves with millennials: he has topped the CPAC straw poll since 2013 with support from the 18-25 crowd, which makes up about half of conference attendees. More than a year ago, as Paul took the stage for his CPAC 2014 address, a crowd clad in red “Stand with Rand” t-shirts stood chanting “President Paul! President Paul!”

He paid particular homage to the tech savvy crowd in his 2013 speech:

“The ‘Facebook generation’ can detect falseness and hypocrisy a mile away,” he said. “They want leaders that won’t feed them a line of crap, or sell them short. They aren't afraid of individual liberty.”

The Kentucky Senator also won over college students: Paul has been at the top of The College Fix's straw poll for the past two years. He came in second after Jeb Bush in Fusion’s 2016 poll earlier this year.

“Rand is a popular candidate among Millennials due to his past record: holding an over 12-hour filibuster for our civil liberties not only makes him popular among the Libertarian-minded but also with liberals who value open discussion and the furthering of individual rights,” Joe Lanoie, a senior at Brandeis University told Townhall. “His stances reflect the millennial view of life: a Liberty-minded and individualistic philosophy against a government which does not care for the millennial viewpoint.”

Paul has also found a balance of business and relatability on social media:

Groovin in my @GOP socks on way home from Iowa. cc: @Reince pic.twitter.com/n5lFeNP9Rx

Millennials have responded with a strong fandom:

If you don't #StandWithRand, you might want to mute me this week. pic.twitter.com/0VzEgh4CGd

More than social media savvy, Paul carries a message of sweeping reform and speaks with urgency and relatability, branding himself as “a different kind of Republican leader” -- a strategy that's powerful with the passionate millennial crowd.