Ransom: A Sharper, Not Bigger, Stick 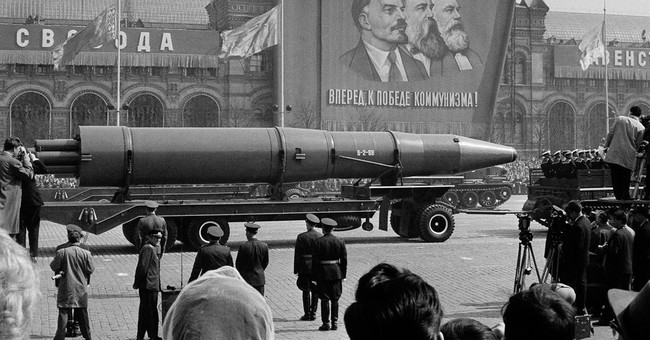 Editor's note: This column originally appeared in the June issue of Townhall Magazine.

I never had any thought that when I set up the CIA that it would be injected into peacetime cloak and dagger operations. Some of the complications and embar- rassment I think we have experienced are in part attributable to the fact that this quiet intelligence arm of the President has been so removed from its intended role that it is being interpreted as a symbol of sinister and mysterious foreign intrigue, and a subject for Cold War enemy propaganda.

Although apparently we live in a post- Cold War world, much of our world, like it or not, has been shaped by the 50-year struggle between communism and free markets. And as we wrestle with massive data collection on American citizens, the re-emergence of Russian power in the East, and what to do about the sleeping giant in China, it’s instructive at this point to go back to the beginning.

For our purposes the beginning is in 1947.

the National Security Council, and other coordinating agencies. Truman claimed to have never contemplated the Act to provide a framework for the modern intelligence community but only to allow the central collection and dissemination of intelligence information.

That being said, the Act did eventually provide the framework to control the mature intelligence capability that collects, analyzes, and provides operational capabilities in support of national security, even today.

In part, the Act sought to help support the Truman Doctrine, which according to the Truman Library, was first espoused in March of 1947 before a joint session of Congress. In short, the Truman Doctrine sought to contain communism by providing financial aid to those countries most in danger of succumbing to communism. The Truman Doctrine itself grew out of one of the most remark- able policy papers ever submitted to the president, NSC 68.

NSC 68 was a policy paper issued by the National Security Council that sounded alarm bells in the administration by alleging a broad conspiracy by the Soviets to establish “hegemony” over the rest of the world. Although NSC 68 overstated the Soviets’ ability to enact such plans by overt and covert means, it undoubtedly reflected the Soviets’ long- term faith in the future of their secular religion.

Much of the Marxist-Leninist dogma rested on the belief in a communist worldwide revolution. As events after World War II bore out, the Soviets were aggressive in expanding their spheres of influence. Far from “simplistic,” as critics claim, NSC 68 painted in better contrast the long-term aims of the Soviets than the president had considered previously. What NSC 68 failed to consider was that communism was not the monolithic state of Russia, but a worldwide association of communist countries in struggle with the West.

Although NSC 68 may have been right in some of its conclusions, its failure to imagine communism as something other than a monolith (just as some still think of al Qaeda as a monolithic organization) continued to point to its deficiencies in coordination.

But despite its flaws, NSC 68 is still remarkable since it provided the West with a successful containment strategy that more or less won the Cold War.

Where the U.S. sought only to contain, the country was successful.

Where the U.S. tried to dominate, however, such as in Korea and Vietnam, success was always doubtful. But even more than victory, NSC 68 also helped ensure survival.

When the Cold War began, with Russia and the United States both possessing nuclear weapons, it was crucial that leaders in both the East and the West have the most up-to-date intelligence with which to make decisions. Intelligence capabilities envisioned by NSC 68 enhanced the ability to not only make decisions, but also to make the correct decisions, real-time.

In a nuclear world it was increasingly important that neither side make a misstep, which could result in a nuclear war. Although it’s true that our military leaders contemplated the use of nuclear weapons in both Korea and Vietnam, those were flights of fancy, not strategic realities.

While many point to the Cuban missile crisis as a nuclear disaster averted, the wonder is that with 50 years of conflict, the United States and Soviet Union weren’t on the brink of disaster almost always.

We need a coherent and unified national security policy, intelligence community policy, and defense policy that reflects the changing needs of the United States, the West, Russia, and China.

We are fighting today’s newest conflicts with tools developed for a different time and different strategy. The strength of the Truman Doctrine and NSC 68 was that they painted a strategy that was comprehensible, executable, and sound.

Citizens will support stern defense measures. They will also support sound intelligence measures. But in the absence of comprehensible policy like the Truman Doctrine, citizens are most likely to support retreat, because that’s a policy that at least they understand.

Since the end of the Cold War, U.S. foreign and defense policies have often been unintelligible, whether conducted by Republican or Democratic administrations.

And the truth is that today the world is getting smaller not bigger.

Comprehensible, executable, and sound policies for defense and world affairs would go a long way toward allowing America to speak quietly while holding a smaller, but sharper, stick. •

John Ransom is the editor of TownhallFinance.com