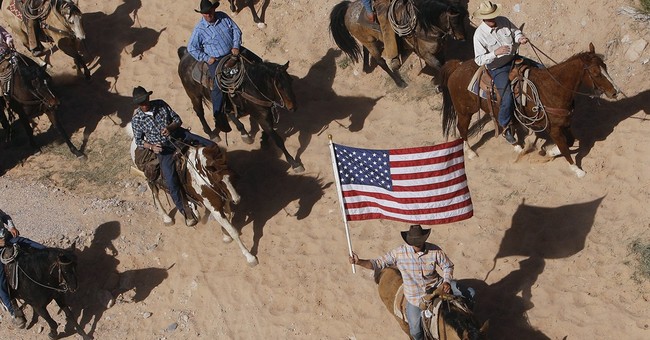 Editor's note: This column originally appeared in the June issue of Townhall Magazine.

The lifespan of an overnight celebrity is short. And Cliven Bundy’s 15 minutes seem to have expired.

After earning the ardent support of many conservative activists and pundits for stiffing the government on a $1 million bill, Bundy did what many average citizens do when they’re suddenly given a massive platform: he revealed himself.

And in his case, his comments on African-Americans—“they abort their young children, they put their young men in jail because they never learned how to pick cotton” and so maybe they’re “better off as slaves”—revealed a side of Bundy that sent those same activists and pundits running away from the Bundy ranch and for the hills of quick condemnation.

The diaspora revealed just how sensitive conservatives are to charges of racism. And who can blame them? The specter lies around nearly every corner.

Who doesn’t remember the long laundry list of dog whistle terms liberal activists maintained and capriciously added to over the course of the past few years in order to link criticism of President Obama’s policies to unspoken racism. The absurd list eventually included words like “golf ” and “Chicago.”

Once Bundy was revealed to be a total embarrassment, liberals were positively giddy over the pain he had caused conservatives. And in their giddy zeal to make the most of the moment, hyperbole and outright lies were the orders of the day.

“[Herein] lies the GOP’s problem. If you ever want to be taken seriously for your outreach efforts, you might want to start by not defending racists.”

Of course, Republicans were not defending Bundy’s racist remarks. Sean Hannity, one of his earliest and most vocal supporters, called his statements “beyond repugnant” and “beyond despicable.” But also, is the DNC communications director actually advocating for Republicans to give up on minority outreach? Does he really want half the country and half the congressional chamber to ignore the plight of minorities? That hardly seems compassionate.

Liberals also insisted that Bundy’s comments reflected the whole of conservative policy, which everyone knows is categorically racist and mean.

CNN contributor LZ Granderson put it this way on “State of the Union”: “You can publicly denounce statements, but still produce policies that actually kind of caters to the statements in the first place.”

I’m unaware of any conservative policies that reinforce Bundy’s comments that African-Americans might be happier as slaves, but what’s the value in honesty when there’s a cheap political point to score?

Much of this was utter nonsense, of course, but what the Bundy situation did reveal is that conservatives will always have one up on liberals in the shame department, in that we’re capable of it and they are not.

Al Sharpton, the Left’s appointed arbiter of race relations and august civil rights crusader, has a well documented history of bigotry. Muse on some of his most memorable moments:

On Jews, whom he referred to countless times as “diamond dealers” during the Crown Heights Riot: “If the Jews want to get it on, tell them to pin their yarmulkes back and come over to my house.”

On homosexuals, to an audience at Kean College in 1994: “White folks was in caves while we was building empires. ... We taught philosophy and astrology and mathematics before Socrates and them Greek homos ever got around to it.”

On Mormons, referring to Mitt Romney in 2007: “As for the one Mormon running for office, those who really believe in God will defeat him anyways, so don’t worry about that.”

Charlatans and race-baiters like Sharpton, Jesse Jackson, and Jeremiah Wright have made careers fomenting division and hatred between groups of people. And for that they are rewarded with presidential honors, lifetime achievement awards, and television gigs.

The world is full of morons, and you don’t always know when one is in your midst. So it’s best to be cautious and judicious when aligning with an overnight sensation.

But at least we can say there’s a difference between us and them: conservatives are embarrassed by their Bundys, while liberals continue to celebrate theirs. •