Every Patient Deserves a “Right to Try” 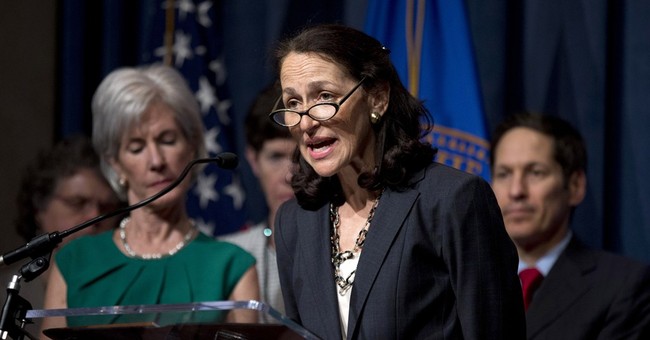 The federal government is allowing terminally ill patients to suffer while the FDA drags out the approval process. Some states are fighting back. In the April issue of Townhall Magazine, where this article originally appeared, HotAir’s Mary Katharine Ham discusses one mother’s battle with the FDA to save her terminally ill sons.

“Both of my sons deserve to live.”

That’s the plaintive cry of a mother-turned-activist whose two children sit on either side of a regulatory battle, their fates in the hands of the Food and Drug

Jenn McNary’s sons, Austin and Max, both have a rare genetic disorder that degrades muscle fiber and strength, often putting patients in wheelchairs by their teens. Duchenne muscular dystrophy has been a degenerative death sentence until recent clinical trials of a drug called eteplirsen.

Max, 12, qualified for that trial. Austin,15, did not. Since taking the drug, Maxis living a life that would have been unthinkable without it, marching in parades, joining a soccer team, etc. With seemingly no adverse effects, the experimental medicine is filling in the genetic gap that caused his muscles to whither. Meanwhile, Austin continues to weaken. He cannot stand or walk.

“[Austin] knew it worked. He looked at his brother and saw it worked,” McNary told the Washington Free Beacon. “When you have a terminal illness, you have nothing to lose.”

“This is their last chance,” she continued. “If we don’t get these boys on this drug, it’s a death sentence for our kids.”

McNary has asked the FDA to give the drug provisional approval, and her Change.org petition has garnered more than 100,000 signatures. The FDA has a process for accelerating drug approval or granting permission to terminal patients, but it is slow, arduous, and not guaranteed. For those with a disease that claim its victims by their early 20s, there’s a real chance death will come before bureaucracy acts.

But Arizona, Colorado, and Missouri are acting more quickly. All three are poised to consider a “Right To Try” law, which would allow terminal patients to try experimental drugs that have cleared the FDA’s Phase I safety hurdle as long as their doctor and the drug company agree to administer it.

Christina Corieri, a health care analyst at Arizona’s Goldwater Institute, which drafted the legislation, explains the purpose of the law: “None of this asking a bureaucrat, none of these delays. You have a fundamental right to try to save your own life.”

Corieri explained the current process for qualifying for “compassionate use” as a terminal patient. Predictably, the lives of real people are dependent upon a great deal of paperwork and no small amount of caprice.

As things stand, if a drug company is willing to give a terminal patient an experimental drug outside of a clinical trial,

and a doctor is willing to prescribe it, the patient can pursue what’s called a single patient IND (Investigational New Drug).

The FDA estimates it takes 100 hours to fill out the requisite paperwork for a single-patient IND. Let’s just say that

estimate is close enough for government work. Corieri confirms it often takes far longer, with the FDA requiring several rounds of clarifications, which puts doctors in a bind. They want to help their patients but have trouble with 100-plus hours of extra work on top of the irregular workload.

When that’s done, the patient’s request must go to an Institutional Review Board, which determines whether the use of the drug would be ethical. This requires waiting for a nearby IRB to convene, and getting on the calendar, which can put off approvals even further, Corieri said, especially in rural areas.

Sadly, there are already patients who died fighting for this right. Kianna Karnes was a 41-year-old mother of four, diagnosed with kidney cancer in 2002. She and her family received national attention while struggling to get a single-patient IND for Karnes, who was ineligible for clinical trials for a promising new drug. She eventually won the battle but lost the war.

“On March 24, 2005, the FDA notified the family that it had approved a single patient IND for Karnes,” Corieri wrote.

Janak Joshi, a doctor and Republican lawmaker in Colorado, has seen just howhard it is to get a patient into a clinical trial. He and Democrat JoAnn Ginal are cosponsoring a “Right to Try.”

“These decisions should be between patients and doctors,” Joshi said.

These bills are in their infancy, but the idea has bipartisan support and polls well. In Arizona, the issue will go on the November ballot if it passes the legislature.