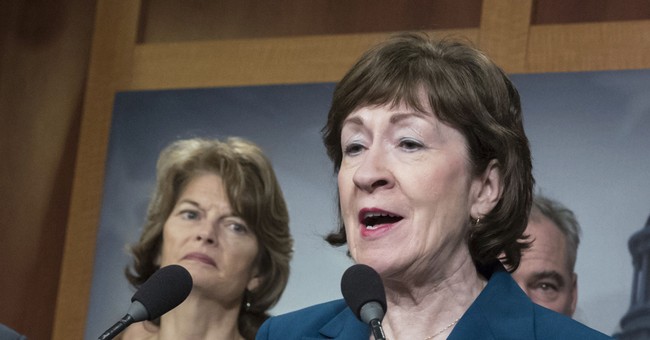 Maine's moderate Republican Senator Susan Collins told CNN's Jake Tapper today that she would not be supporting a Supreme Court nominee who has "demonstrated hostility to Roe v. Wade" because, in her mind, that would be a justice who does not respect established precedent.

Sen. Collins, a pro-choice Catholic Republican, is under pressure to vote only for a likeminded Supreme Court justice from those who want to keep abortion legal and fear that President Trump's pick to replace Justice Kennedy could be the swing vote needed to make abortion against the law, thus overturning several Supreme Court cases including Roe v. Wade.

"I would not support a nominee who demonstrated hostility to Roe v. Wade because that would mean to me that their judicial philosophy did not include a respect for established decisions, established law," Collins said on CNN's State of the Union.

"I want a judge who will apply the law to the facts of the case with fidelity to the Constitution," Collins added. "Roe v. Wade is a constitutional right that is well established, and no less an authority than Chief Justice Roberts said that repeatedly at his confirmation hearing."

Sen. Collins stated that Justice Gorsuch had expressed that he would be most likely not overturn the 1973 ruling because Roe has now been long established.

Moments later on the show, Democratic Senator Tammy Duckworth undermined this claim by reminding Tapper that Justice Gorsuch has already ruled against long established precedent, including this past week regarding the issue of forced public  sector union fees.

"Justice Gorsuch told her that he would respect precedent, and yet he has voted against precedent just this week with the Janus case," Duckworth said.

Sen. Collins also stated that somebody who might want to overturn the ruling would have an "activist agenda."

“A candidate for this important position who would overturn Roe v. Wade would not be acceptable to me because that would indicate an activist agenda that I don’t want to see a judge have,” Collins said.

President Trump will announce his choice to replace Justice Kennedy on July 9th.