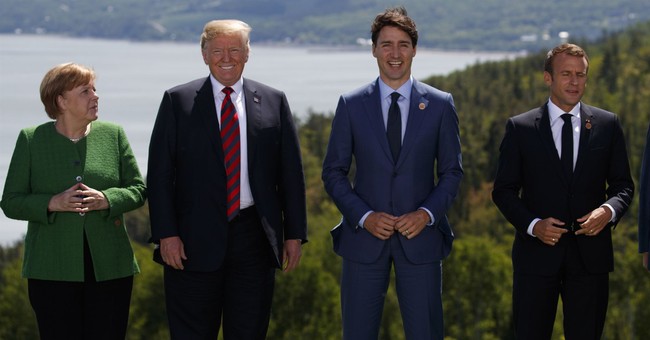 President Donald J. Trump is being accused by some of upending “two days of global economic diplomacy” after he tweeted that the United States should not sign the G7 Communique that Canada’s Prime Minister Justin Trudeau said had been agreed upon in Quebec. But, Trump's defenders today say that he is simply standing up for America.

The New York Times notes that in a press conference Saturday afternoon, “...Mr. Trudeau said the seven nations had reached broad agreements on a range of economic and foreign policy goals. But he acknowledged that deep disagreements remained between Mr. Trump and the leaders of the other nations, especially on trade."

"Mr. Trudeau had sought to play down personal clashes with Mr. Trump as he wrapped up the summit, calling the meeting 'very successful' and saying he was 'inspired by the discussion.'", the paper adds. "But he also pledged to retaliate against the United States tariffs on steel and aluminum products in defense of Canadian workers.”

Based on Justin’s false statements at his news conference, and the fact that Canada is charging massive Tariffs to our U.S. farmers, workers and companies, I have instructed our U.S. Reps not to endorse the Communique as we look at Tariffs on automobiles flooding the U.S. Market!

PM Justin Trudeau of Canada acted so meek and mild during our @G7 meetings only to give a news conference after I left saying that, “US Tariffs were kind of insulting” and he “will not be pushed around.” Very dishonest & weak. Our Tariffs are in response to his of 270% on dairy!

This led to some confusion in Congress and the media. Senator John McCain responded to these tweets by supposedly speaking for the American people and saying that the country stands with the rest of the G7 countries, even if President Trump does not.

To our allies: bipartisan majorities of Americans remain pro-free trade, pro-globalization & supportive of alliances based on 70 years of shared values. Americans stand with you, even if our president doesn’t.

In a tense interview today with CNN’s Jake Tapper on "State of the Union," Trump's economic advisor Larry Kudlow lambasted Trudeau. He accused him of “sophomoric play” for insulting the United States during his press conference.

“Kudlow accused Trudeau of making his comments for ‘domestic political consumption’ and doing ‘a great disservice to the whole G7'...'He really kind of stabbed us in the back,'" CNN reports.

President Trump’s chief economic adviser Larry Kudlow accuses Canadian Prime Minister Justin Trudeau of undermining the US and its allies with comments he made at the G7 summit: “He really kind of stabbed us in the back” https://t.co/a4EN9qhTZD pic.twitter.com/gUlb3VrOeI

Kudlow adds that Trudeau’s press conference was indignant and seemed to claim it was an attempt to undermine President Trump’s historic summit with Kim Jong un in three days.

"He is not going to permit any show of weakness on the trip to negotiate with North Korea," Kudlow told CNN.

"They should have said to him, 'God speed, you are negotiating with the crazy nuclear tyrant in North Korea, and we are behind you,'" Kudlow added.

"There's a special place in hell for any foreign leader that engages in bad faith diplomacy with President Donald J. Trump and then tries to stab him in the back on the way out the door," Navarro told 'Fox News Sunday.' "And that's what bad faith Justin Trudeau did with that stunt press conference. That's what weak, dishonest Justin Trudeau did, and that comes right from Air Force One."

Peter Navarro: "There’s a special place in hell for any foreign leader that engages in bad faith diplomacy with President Donald J. Trump and then tries to stab him in the back on the way out the door...that’s what bad faith Justin Trudeau did with that stunt press conference." pic.twitter.com/KtqKXizBEc

The president's team asserted that Trump and his team had agreed to the Communique in good faith, but now it is unclear what trade agreement will be reached amongst the coalition.