Romney Refuses to Say Whether or Not He Will Endorse Trump 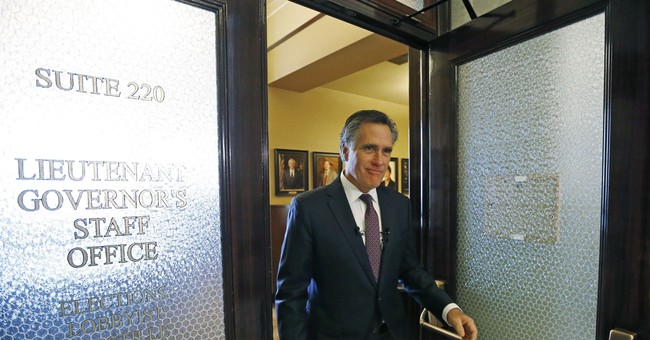 Former  Massachusetts governor Mitt Romney has been endorsed by President Donald J. Trump for the senate seat in Utah. But, that does not necessarily mean Gov. Romney will return the favor, he tells CNN.

"I will make that decision down the road," Romney, who is running for US Senate, said in an interview with CNN as he waited for his turn to speak at the Utah GOP convention where he was vying for his party's nomination. "As a person of political experience, if I endorse someone, I'll want to know what's in it for Utah and what help would he provide for us on key priorities in Utah."

Romney added that he assumes that President Trump will be the 2020 Republican nominee but also expects their may be primary challengers.

When Romney announced his senate candidacy in February, President Trump said that Romney would be a "worthy successor" to current senator, Orrin Hatch.

.@MittRomney has announced he is running for the Senate from the wonderful State of Utah. He will make a great Senator and worthy successor to @OrrinHatch, and has my full support and endorsement!

Some speculate that Mitt Romney is using Utah as a launching pad for his own challenge to President Trump. Political rabble rouser Roger Stone speculates that at Romney's age, it makes no sense to run for senate unless there were higher ambitions.

"I have sources in the Utah Republican Party, I have sources relatively high up in the Church of Latter Day Saints, it also makes no sense why someone at Mitt Romney's age, who has been an executive in every position he's ever had, would want to be a freshman senator, and therefore I believe and my contacts in Utah are absolutely insistent that he will use the Senate seat as a launchpad for a challenge to Donald Trump," Stone told Business Insider.

Stone predicted that once Romney is sworn into the Senate, he'll become the "replacement" for Republican Sen. John McCain, who has consistently spoken out against Trump's policies and rhetoric, and become "a thorn in Donald Trump's side."

"And he'll use it as a launchpad for another bid for president," he said, adding that Trump could either "be unbeatable or he could be vulnerable" in 2020.

Still, others such as Utah Gov. Gary Herbet say his end goal is not the presidency, but to replace senate majority leader Mitch McConnell.

Herbert pointed to Romney's past experience as governor of Massachusetts, a deeply blue state, as proof that he can work with Democrats to produce results, something Herbert said should be attractive to Republican leadership.

Romney has been accused by many in the past of being a "flip-flopper" and saying or doing whatever is politically expedient in order to get elected. It is unclear how these comments will affect his bid for the Utah senate GOP nomination.

Recommended
Trump Asked About Reports He 'Liked What He Saw' on Jan. 6
Leah Barkoukis
Share this on Facebook
Tweet
BUSTED: What an SF Bay Area Teachers' Union President Was Caught Doing Should Have Parents' Blood Boiling
Matt Vespa
How Minneapolis Is Planning to Avoid Unrest During Derek Chauvin Trial
Leah Barkoukis