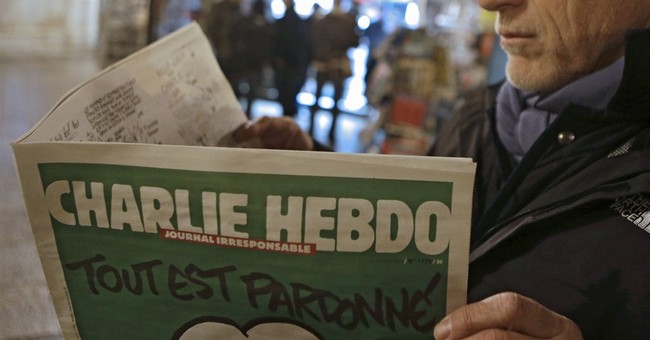 Before sunrise in Paris, the 3 million issues of latest Charlie Hebdo issue were gone. Sold out.

The cover featured an image of the Islamic Prophet Muhammad, holding a sign “Je Suis Charlie.” The image and text ("I am Charlie") showcased the international community that formed after eight Charlie Hebdo staff members were murdered last week by Muslims extremists.

In anticipation of the surge of support, the paper had printed 50 times its usual circulation, but even that was not enough to meet buyer demands. According to the BBC, another five million copies are in production.

“@Slate: What does the new #CharlieHebdo cover mean? The cartoonist who drew it explains: http://t.co/YETqX5pQPN pic.twitter.com/Evjg1RxjNv”

Along with the backing of the French people, the government took a stand in light of the tactics used last week by Islamic extremists. The Associated Press reports:

Since the attacks, France has deployed 10,000 troops and 120,000 security forces in an area the size of Texas to protect sensitive sites, including Jewish schools and synagogues, mosques and travel hubs. French police say as many as six members of the terror cell may still be at large.

On the cover, above the cartoon of Muhammad are the words, "Tout est pardonné" or "all is forgiven." Forgiven, perhaps, but certainly not forgotten. Charlie Hebdo's grace and courage in the matter will doubtless help incite manu with courage in the aftermath of the attacks.