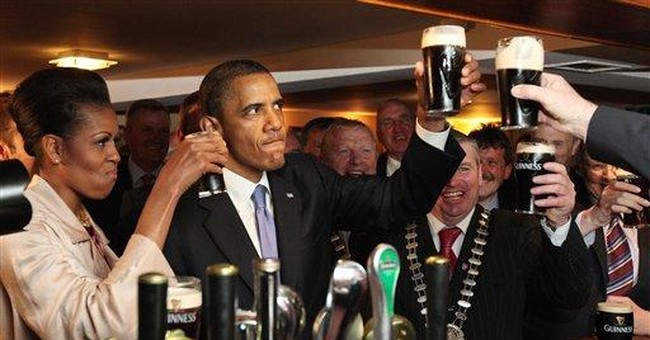 Townhall: This is a really quirky, fun book. What gave you the idea to write about the presidents’ drinking habits?

Will-Weber: It kind of came from one little source. There is a book out called “First Off the Tee,” and it’s about the presidents golfing. In the middle of that book they talk about when Warren G. Harding was president, and of course it was during prohibition and nobody was supposed to drink or transport alcohol. And Harding used to go golfing and would always stick a fifth of whiskey in his golf bag and about every two or three holes he would stop and take a pop of his whiskey. Then after the rounds they’d retire to this little clubhouse and drink a little bit more and maybe play poker, stuff like that, and then he’d scoot home to the White House. So the germ of this book came from that idea.

Townhall: How did you approach writing about the presidents who didn’t drink?

Will-Weber: Well, the more I thought about it, I thought, ‘OK, Jimmy Carter didn’t drink,’ but then I thought ‘wait a minute, Jimmy didn’t drink but Billy did and made his life miserable.’ So I started thinking about the people around the non-drinkers that they still had to con- tend with. I mean Lincoln had the same thing with General Grant and his vice- president, Andrew Johnson, who showed up at the inauguration drunk.

So the people that didn’t drink still had to deal with alcohol in one way or anoth- er. Almost all of them had to offer alcohol to their would-be voters. That pre-dates the United States, actually, it goes back to Washington running for the House of Burgesses when we were still a colony and he was using alcohol to get votes to sit on the House of Burgesses in Virginia.

Townhall: Where did you find the information? I mean, you even have some recipes in the book. Were any presidents particularly difficult to trace?

Will-Weber: It was a lot easier than I thought. My choice research was to try for letters and memoirs of the presidents where they mention alcohol. I was kind of astounded to find that I could go to the Massachusetts historical website and I could call up any letter that John Adams ever wrote to Abigail, and then in the search button I could put in ‘rum.’ And it would promptly pick up 16 letters where John Adams mentioned ‘rum,’ and it would highlight them in the letters for me. It really cut down on wasted research time. So that was cool. But that was tricky in itself because those early guys had a whole different language when they talked about alcohol. They wouldn’t say ‘I was drunk last night,’ they’d say ‘I was quite fuddled.’ So then I would start Googling ‘fuddled.’ Another example of how their slang was different than today: Instead of saying ‘he was on a three-day binge’ or a ‘bender’ they would say ‘he was on quite a frolic.’ It led me to this whole different terminology that the guys pre-civil war used when they talk about alcohol.

Townhall: What sorts of things did you learn about their lives based on their drinking habits?

Will-Weber: I learned a lot of peripheral things that I hadn’t intended to pursue, so I almost feel like I took this course on the presidents for two years. What I learned, and maybe not surprisingly, is that alcohol when it comes to the presidents is not any different than the rest of us with alcohol. It tends to bring out, in 90 percent of them, their worst traits. In other words, LBJ becomes more arrogant and crude, Nixon becomes more paranoid, Andrew Jackson would become more belligerent, and Andrew Johnson would be more combative, verbally mainly with him.

In very few cases did it improve them; one of the few cases would be George Washington. Many said that Washington was cold and reserved, and that was the knock that Washington didn’t have a personality. He rarely smiled. But one of the things I found was, a visitor to Mt. Vernon who said, “Once the general had a couple glasses of champagne he became much more animated and funny and smiled and laughed.”

Another guy would be Reagan. It kind of helped Reagan. Michael Deaver, Reagan’s assistant, didn’t like that Reagan was sort of pale and pasty looking so before he’d go on TV, he’d try to get Reagan to have a little glass of red wine to bring the capillaries out in his cheeks so he wouldn’t look quite so ghostly. And weirdly, since Reagan was an actor, he refused to do makeup, so this is how Deaver got him to look how he wanted him to look.

Townhall: Which president was the most alcoholic?

Will-Weber: Definitely, Franklin Pierce, who is not one of our better-known presidents; he is the only president from New Hampshire, and Pierce actually died from cirrhosis of the liver. He actually had a very sad life, he lost all three of his children, for instance. And the last one, two of them didn’t live beyond two, and then this boy he loved, Benny, was 12 I think, and right after Pierce was elected president they were in a horrific train wreck and the boy was the only person on the train that died, he was thrown from the train. And Pierce had to scramble down the snow bank, bring the body back up. And then his wife never could come to grips with it, she felt that God was punishing them because Pierce had accepted the presidency, and so she spent a lot of time at the White House up in her bedroom writing letters to the dead son. So if that doesn’t make you want to drink, I don’t know, so I have a little sympathy for Pierce and I wouldn’t be so quick to just dismiss him as a drunk.

Townhall: Did you learn about any fun drinks that you’d never heard of and wanted to try?

Will-Weber: My friends teased me all the time, they’d say, ‘You’re probably trying all these drinks as you go through the book.’ The Teddy Roosevelt Mint Julep is a little bit different because he uses rye whiskey instead of bourbon, which anybody in Kentucky would jump off a bridge if they heard that, cause it’s almost sacrilegious to use anything but bourbon if you are making a true Mint Julep. Teddy liked to use rye whiskey with it, about two ounces, and then he would put a little half ounce of rum in it, in addition to the mint and the sugar. So that sounds kind of interesting to me, I might want to try that one.

Then the other thing I’d love to try is have a White House honey ale with the president because they make their own beer there and he’s put the recipe out online, so that’s in the book. But it sounds like a good beer, but that might be a tough ticket to get.

But those two in particular, some of the others sound kind of disgusting. I don’t know if I’d want to try them. Some of them are all booze, like the Nixon.

I have tried the George Washington Tavern Porter and the Thomas Jefferson Tavern Ale, and those are both products put out through the Yards Brewery in Philly. And they are pretty authentic. They follow the original recipes, I’m sure they probably had to make some adjustments, but they are very good and I like the idea that they were historically based. •