Poll: Unlike Obama and the Media, Americans Stand with Israel 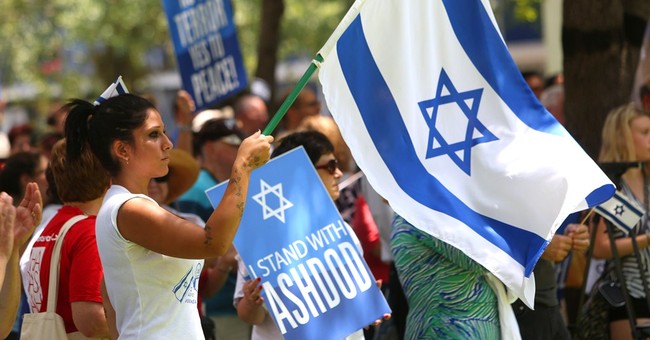 Americans stand with Israel, but does Obama and the media? A new Rasmussen Reports poll found that 57 percent of likely American voters support Israel over Palestine in the current Gaza conflict. Only 8 percent, however, sided with the Palestinians. The remaining poll participants were unsure (16 percent) or supportive of both sides (8 percent). While the support for Israel seems overwhelming among citizens, many question where the Obama administration and the media’s priorities lie:

State Department spokesperson Jen Psaki claimed that the U.S. was appalled with Israel’s “disgraceful shelling outside an UNRWA school in Rafah sheltering some 3,000 displaced persons, in which at least ten more Palestinian civilians were tragically killed.”

This was hardly everyone’s view, however. Even Hillary Clinton came out in support of Israel in the aftermath of the bombing. According to an interview in the left-leaning newspaper The Atlantic, Clinton vociferously defended both Israel and Netanyahu:

“I think Israel did what it had to do to respond to the rockets,” she told me. “Israel has a right to defend itself. The steps Hamas has taken to embed rockets and command-and-control facilities and tunnel entrances in civilian areas, this makes a response by Israel difficult.”

I asked her if she believed that Israel had done enough to prevent the deaths of children and other innocent people.

“[J]ust as we try to do in the United States and be as careful as possible in going after targets to avoid civilians,” mistakes are made, she said. “We’ve made them. I don’t know a nation, no matter what its values are—and I think that democratic nations have demonstrably better values in a conflict position—that hasn’t made errors, but ultimately the responsibility rests with Hamas.”

The relationship between President Barack Obama and Israeli Prime Minister Benjamin Netanyahu has never been more antagonistic, according to former American-Israeli ambassador and current Princeton professor Daniel C. Kurtzer. Perhaps this is what the American people are glimpsing.

For more on how the media is reporting on Gaza, watch S.E. Cupp detail what reporters omit about Hamas’ charter.