Acting AG Whitaker Pretty Much Tells Dems To Shove It: No Recusal From Overseeing Russia Probe 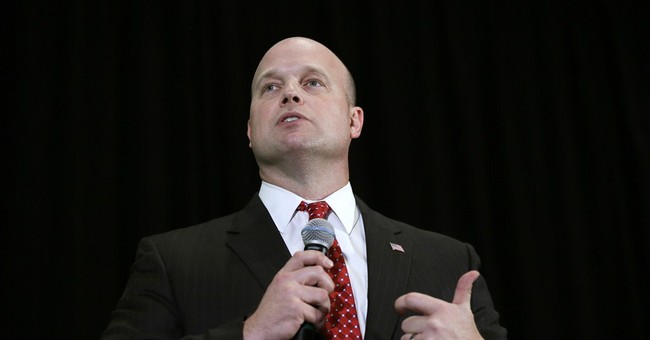 President Trump fired Jeff Sessions from his attorney general post yesterday. Matthew Whitaker is now acting attorney general, and he’s now in position to oversee the Russia investigation led by Special Counsel Robert Mueller. Whitaker has criticized the probe before, which prompted top Democrats to call for his recusal (via The Hill):

"Given his previous comments advocating defunding and imposing limitations on the Mueller investigation, Mr. Whitaker should recuse himself from its oversight for the duration of his time as acting attorney general," Schumer said in a statement on Wednesday.

Schumer, in a separate press conference with reporters, warned that attempts by Sessions's successor or Trump to interfere with the investigation would spark a "constitutional crisis."

Deputy Attorney General Rod Rosenstein has been overseeing the Mueller investigation since Sessions recused himself from the investigation last year due of his involvement in Trump's campaign.

But the Justice Department told CBS News on Wednesday that Whitaker will now oversee the probe.

Well, despite recusal calls, Whitaker is pretty much telling the Democrats to shove it, with his associates telling The Washington Post that he has no plans to do so:

Acting Attorney General Matt Whitaker has no intention of recusing himself from overseeing the special counsel probe of Russian interference in the 2016 election, according to people close to him who added they do not believe he would approve any subpoena of President Trump as part of that investigation.

Since stepping into his new role on Wednesday, Whitaker has faced questions — principally from Democrats — about whether he should recuse from the Russia investigation, given that he has written opinion pieces in the past about the investigation, and is a friend and political ally of a witness.

On Thursday, two people close to Whitaker said he has no intention of taking himself off the Russia case.

First of all, let’s drop the fiction that if Sessions hadn’t been fired, the Democratic subpoena assault wouldn’t have happened. The Trump administration is going to be investigated over Russia, taxes, voter ID laws, any aspect of this White House the Left hates was going to be put under the microscope now that Democrats have retaken the House. The moment the Democrats clinched the required 23 seats to retake the lower chamber; they were readying the various probes into this presidency—and the left wing harassment of this administration is about to begin.

On a side note, Trump is going to need a wartime consigliere for the assault that’s on the horizon.

Narrator: Nobody is perplexed, only a dummy would think Judiciary would magically leave Trump alone for two years if only he kept Sessions at DOJ, and also the incoming Dem Judiciary Chairman previously demanded Sessions' resignation. https://t.co/Bu9xY7ozrV