Trump On Christine Blasey Ford: ‘I Had To Even The Playing Field’ In Kavanaugh Confirmation Battle 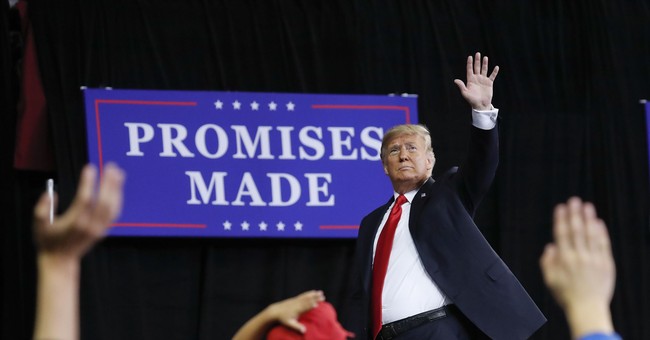 The battle is over. We won. Judge Brett Kavanaugh is now Associate Justice Brett Kavanaugh. It was a slim vote: 50-48. But we got him over the finish line, defeating the brutal smear campaign executed by the Left.

Three allegations of sexual misconduct were hurled at Kavanaugh. All three accusations were without corroborating witnesses or evidence. They were dropped at the last minute in the confirmation process. The Democrats threw a Hail Mary, and the GOP broke it up. It was not easy. The GOP’s razor-thin margin in the Senate shifted big league days prior to the final vote. The cloture vote is what sealed the deal. With Sens. Jeff Flake (R-AZ), Susan Collins (R-ME), and Joe Manchin (D-WV) supporting the nomination, that was the ball game.

Yet, during rallies before the final vote, President Trump took swipes at the first accuser—Christine Blasey Ford—who alleged that a drunken 17-year-old Kavanaugh tried to rape her. She wrote about this allegation in a letter to Sen. Dianne Feinstein’s (D-CA) office during the summer. Feinstein sat on it for weeks, didn’t tell anyone about it, and dropped it at zero hour. Someone in her office probably leaked it. Democrats were the only ones who knew.

Ford cannot remember key details: who organized the party, whose house it was held in, how she got there, and who took her home after the alleged attack. Her family has been conspicuously absent in this ordeal. This is what Trump hit on, which triggered liberals and congressional Democrats, who had weaponized this allegation to try and derail the nomination. They thought they could mount enough pressure on the GOP. Wrong. The GOP fought back and beat them. After his rally in Kansas over the weekend, which was really the Kavanaugh victory fest, Trump said he went after Ford’s account to even the playing field (via The Hill):

Trump discussed Kavanaugh’s confirmation during an on-air call with Fox News host Jeanine Pirro after his rally in Kansas.

Pirro said that Trump was “disciplined” after Ford’s allegations came out and asked him why he decided to mock her during a rally last Tuesday.

“You went off script and some people said you were extremely unkind to Christine Ford,” Pirro said.

“But what was it that got you to pivot from your restraint about her and to fight for Kavanaugh at that point?" she asked.

“So I evened the playing field,” the president said, adding that things “started to sail through” after he spoke out against Ford.

We don’t know if Ford’s account is true. We don’t know if Deborah Ramirez, the second accuser, is telling the truth. Ramirez says Kavanaugh exposed himself at a party at Yale. We probably know that the third accuser, Julie Swetnick, who alleges that Kavanaugh was part of a gang rape crew in high school, is probably peddling straight bull crap. No one took the third accusation seriously; even NBC News said the story is full of holes. The New York Times didn’t run stories of their own on the last two accusations because they couldn’t confirm anything. This was the ammunition the Left used to try and derail Kavanaugh. Yeah, it was time for Trump to use the bully pulpit of the presidency. His nominee, our nominee, was under attack. It was time to go on the offensive.