Friendly Reminder: The Existence Of Trump's N-Word Tape Could Be As Mythical As Russian Collusion 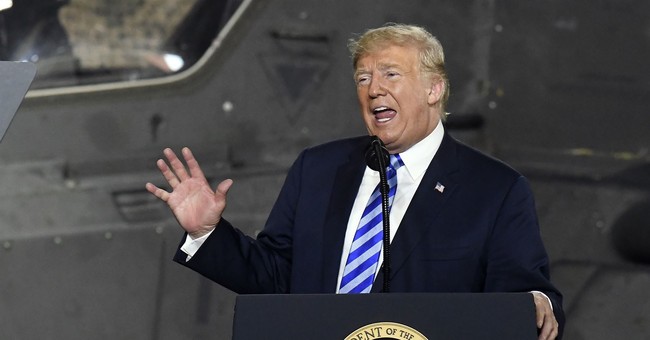 Omarosa Manigault is no longer at the Trump White House, but she was apparently a trainwreck, she secretly recorded conversations, including in the Situation Room, and has accused President Trump of being mental diminished because of this soda habit. In truth, liberals would eat this up. I’m sure a few are, but the source is Omarosa. That’s the issue. Even liberal outlets, like Slate, along with a host of media figures unfriendly to the president have torched Omarosa’s credibility. Yet, here we are with the racism stuff again. Omarosa has accused Trump of being racistand apparently there’s an infamous tape, where he uses the n-word. Guy has more on that:

Let's review: During the 2016 presidential campaign, rumors persisted regarding the existence of a tape featuring an Apprentice-era Donald Trump uttering the N-word.  People whispered and speculated about it -- but unlike the infamous Access Hollywood recording, it never emerged.  Perhaps it's completely made up.  It's entirely reasonable to suspect that Trump's critics would shamelessly peddle smeary innuendo to further toxify him on racial matters, a vulnerability that is at least partially of his own making.  Perhaps it truly is out there, but its possessor is committed to keeping it under wraps.

There are witnesses too, which keeps this in the news (via USA Today):

For nearly two years, Washington politicos and media types have been searching for this chimera tape from Trump's years on NBC reality show "The Apprentice," starting after he won the Republican nomination in the summer of 2016 and reaching a crescendo just before the November election.

The latest to dredge up the tape talk: Omarosa Manigault Newman, the former "Apprentice" contestant and ex-Trump loyalist who is currently promoting her White House tell-all book "Unhinged," and comedian/magician Penn Jillette, who competed in the 2012 season of "The Celebrity Apprentice."

Omarosa says the tape exists, that she's heard it and that her search for it got her fired from the White House. Jillette says the tape exists and he knows this because he was in the room with Trump when he said racist and sexist things during his season, which aired in 2012.

Yet, The Daily Beast’s Asawin Suebsaeng was on Bill Press’ show, said he spoke to dozens of those who had worked on The Apprentice, current and former, and no one them knew about this “mythical” n-word tape. Granted, the publication got some Trump stories from this time during the 2016 campaign. It wasn’t the best picture, but this tape is still a figment of the imagination for Suebsaeng and other reporters. He mentioned Yashar Ali, who wrote in the Huffington Post, that the person Omarosa claimed to have visited the White House and played the infamous tape had no clue what she was talking about:

Former White House staffer Omarosa Manigault Newman told at least three longtime Donald Trump aides that a former contestant on “The Apprentice,” Troy McClain, played a tape for her in the White House that included the president saying a racial slur while he was wearing a microphone during a taping of the reality show, sources have told HuffPost.

Manigault Newman told multiple Trump aides last December that the audio played for her by McClain included Trump allegedly used a racial slur in referring to a black “Apprentice” contestant, Kwame Jackson. In an interview with MSNBC host Chris Matthews on Monday night, Manigault Newman said that she had heard the alleged tape, that it was three minutes in length and that Trump used the slur in speaking about Jackson. She did not say who played the tape for her. Manigault Newman also said that the tape of the audio was in possession of “Apprentice” producer Bill Pruitt.

Reached by phone last Saturday, Lynne Patton, a longtime Trump organization aide who now is a top official at the Department of Housing and Urban Development, recounted the phone call she received from Manigault Newman the night the White House aide was fired. Patton said that Manigault Newman told her last December that McClain played her the audio, which Manigault Newman told her was in Pruitt’s possession. Two other Trump aides received such calls, they confirmed to HuffPost. Those two aides asked to remain anonymous.

McClain, reached by phone, confirmed that he met with Manigault Newman in the White House in December 2017, while she was director of communications for the White House Office of Public Liaison, but when McClain was asked if he played a recording for her of the president using a racial slur, he laughed and said, “You’ve got to be bullshitting me. Is this a joke?”

McClain denied that he ever played such a recording and said that Manigault Newman would never say he did. But multiple sources familiar with her communication about the meeting with McClain confirm that she said he played the audio file for her or that he discussed that he had heard the audio with her.

As the contradictions continue to build, Manigault Newman’s claims have been difficult to track. She told Chuck Todd on “Meet the Press” that she had heard the audio after her book was published. She told multiple Trump staffers that she heard the audio the day she was fired.

So, again, it gets back to the source of this story, which has as much credibility as North Korean state television. Just as the Russian collusion allegations have turned into a wild goose chase that has produced zero evidence after a year of investigating, it seems we could be heading in that direction with this apprentice tape, albeit with more chaos added.