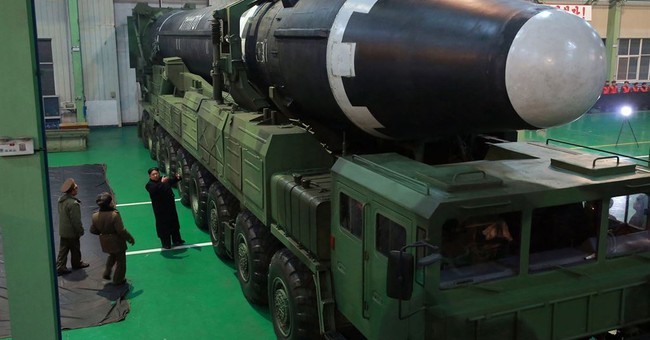 Well, weeks after the historic summit between the United States and North Korea’s Kim Jong-un, in which the latter agreed to denuclearization, there are reports that the communist nation is developing new intercontinental ballistic missiles. Does this mean the peace process is dead? No, but it’s probably déjà vu to many who thought we could make progress with this country that has been a thorn in the side of American foreign policy (via WaPo):

U.S. spy agencies are seeing signs that North Korea is constructing new missiles at a factory that produced the country’s first intercontinental ballistic missiles capable of reaching the United States, according to officials familiar with the intelligence.

Newly obtained evidence, including satellite photos taken in recent weeks, indicates that work is underway on at least one and possibly two liquid-fueled ICBMs at a large research facility in Sanumdong, on the outskirts of Pyongyang, according to the officials, who spoke on the condition of anonymity to describe classified intelligence.

The findings are the latest to show ongoing activity inside North Korea’s nuclear and missile facilities at a time when the country’s leaders are engaged in arms talks with the United States. The new intelligence does not suggest an expansion of North Korea’s capabilities but shows that work on advanced weapons is continuing weeks after President Trump declared in a Twitter posting that Pyongyang was “no longer a Nuclear Threat.”

Take what you will from this. Patience was always necessary in dealing with this nation, or any closed society for that matter. There will be hiccups, but President Trump’s summit with North Korea was a positive step. At the same time, it’s a rather unfortunate turn of events, as North Korea has made many gestures of good faith. They recently returned the possible remains of U.S. soldiersfrom the Korean War. Before we pull the plug on everything, let’s see how the Trump administration handles this development.

Wow, North Korea didn't totally abolish its military the day after the summit? Astonishing. This calls for Intel Leaks presented in the most incendiary fashion possible, so as to undermine further diplomatic engagement. Thankfully our media is credulous enough to assist

Interesting how Intel Leaks designed to frustrate diplomacy get huge play in US media because they're seen to undercut Trump, while actual signs of diplomatic reconciliation go relatively unnoticed https://t.co/vOiXMRLD74