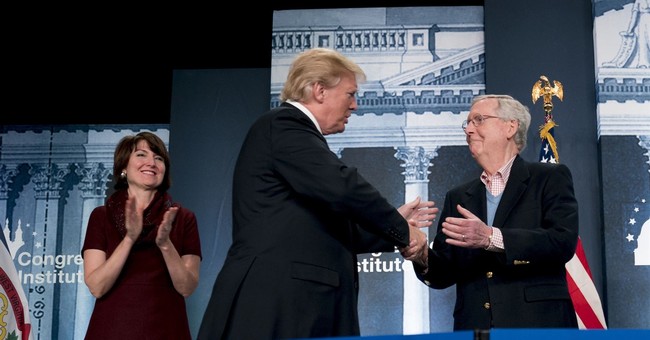 As with anyone, there are things I like about Senate Majority Leader Mitch McConnell (R-KY) and then there are things where I’m facepalming. His botching of the skinny repeal is a notable facepalm moment, where the campaign promises of repeal and replace by Republicans for nearly a decade collapsed. We had to settle for gutting the individual mandate instead. It’s still good, but not what the base wanted. Regardless, if there is one thing, besides Hillary Clinton, that juiced conservatives to turn out in the 2016 elections—it was the Supreme Court. The late Antonin Scalia had passed away. There was a vacancy—and Obama was still president. He picked Merrick Garland from the D.C. Court of Appeals, but the GOP controlled Congress. It was an election year, so Mitch decided to roll the dice, block the nomination, and invoke the Biden rule. Guy posted about that. Here’s then-Sen. Joe Biden (D-DE) from 1992, who the rule is named after

It is my view that if a Supreme Court Justice resigns tomorrow, or within the next several weeks, or resigns at the end of the summer, President Bush should consider following the practice of a majority of his predecessors and not--and not--name a nominee until after the November election is completed. The Senate, too, Mr. President, must consider how it would respond to a Supreme Court vacancy that would occur in the full throes of an election year. It is my view that if the President goes the way of Presidents Fillmore and Johnson and presses an election-year nomination, the Senate Judiciary Committee should seriously consider not scheduling confirmation hearings on the nomination until after the political campaign season is over...

There was an outcry like you wouldn’t believe from the Left. They whined. They criticized. They ranted, but Mitch held the line. It was a gamble too. Hillary Clinton could have very well won the 2016 election and McConnell would have to deal with a hardcore liberal nominee instead of a more centrist Garland. This showdown with the Obama White House and the Democrats was months before the 2016 election—but 21 percentof the 2016 electorate thought SCOTUS was “the most important factor.” And of that 21 percent, 56 percent broke for Donald J. Trump. That could have been the difference. Either way, Mitch and the Senate Republicans holding firm on SCOTUS arguably helped Trump win in ’16 by reminding conservatives, even some that might have been skeptical that it’ll be better to have him in office than Lady Macbeth, turnout to vote, which led to Neil Gorsuch, and now our key win in affirming the constitutionality of the president’s executive order on limiting travel from certain terror-prone nations.

Of all the trophies on Mitch McConnell's wall, this one might be the best pic.twitter.com/vE5dy9Le16

We have to give credit where it’s due—and Mitch did us a solid in keeping Garland from filling that vacancy. McConnell’s office trolled hard after today’s Supreme Court ruling on the so-called travel ban. Hey, it’s warranted. Now, was this THE factor in Trump winning? No. Of course, Trump did most of the leg work, but it's not outrageous to say that this was a key assist.

And now, the political war chests for public sector unions have been severely curtailed.

UPDATE: With the retirement of Justice Anthony Kennedy, the blocking of Merrick Garland's nomination appears to be not only the right thing to do by invoking the Biden rule, but also the most strategic move made by Senate Republicans in this fight over the Court. And with Kennedy's vacancy being filled this fall per Sen. Mitch McConnell, it once again makes SCOTUS an election issue that will drive GOP voters to the polls. With the abcnese of a border wall, which would have been a slam-dunk for the base, they now have another huge reason to vote this November. They will be helping the GOP keep the Trump agenda alive, which has produeced a booming economy, but also a solid conservative majority on the Supreme Court. For a lot of reluctant Republicans who voted for Trump in 2016, the Supreme Court was undoubtedly the reason why they showed up to the polls. They gambled. They threw the dice on Trump, who isn't your typical conservative Republican. That gamble has certainly paid off, with Trump now being in a position to shape the Court. Thank God Hillary is not president.