Of Course, CNN's Acosta Had An Outburst At The Trump-North Korea Summit 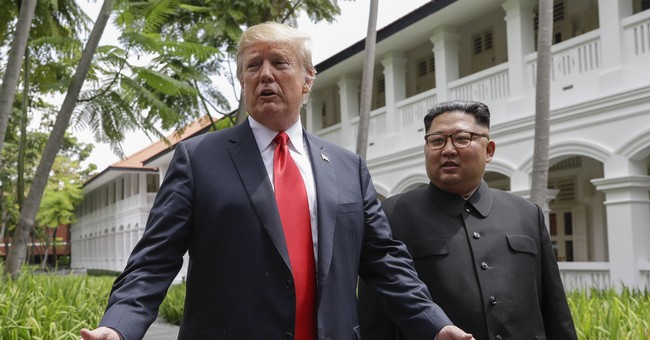 Well, it’s par for the course for CNN. White House Correspondent Jim Acosta decided to hurl questions at President Trump and North Korean dictator Kim Jong-un during their historic summit in Singapore. Acosta directly questions Kim, asking him if he was going to get rid of his nuclear weapons (via Real Clear Politics):

CNN's Jim Acosta proved to be a nuisance each time President Trump and Kim Jong-un made public appearances during their Singapore summit on Tuesday.

"Mr. Kim, will you give up your nuclear weapons sir?" Acosta shouted when the two made their initial solo appearance to the press.

"I don't think Kim Jong-un is used to the voice of Jim Acosta of CNN on a regular basis," MSNBC's Brian Williams cracked.

He was reportedly caught in a hot mic moment saying, “Hey if they're not going to let me in the f*cking meeting, that's what happens.”

JUST IN: CNN's Jim Acosta caught on hot mic justifying shouting questions at Trump-Kim summit: "Hey if they're not going to let me in the f*cking meeting, that's what happens... That's the way it goes, baby." pic.twitter.com/kcgNI8Wk4E

This isn’t the first time Acosta has blurted out questions. At a press sprayfor the reauthorization of the National Defense Authorization Act back in December of 2017, the CNN reporter asked the president what he meant by Sen. Kirsten Gillibrand (D-NY) being willing to do anything for campaign contributions, which some took as sexist; Trump has pretty much said the exact same thingto other politicians, both male and female. Acosta was scolded since this event was one in which no questions were to be asked.

Last January, during a photo op with the president of Kazakhstan, Acosta tried to get the president to answer his questions about immigration. This was during the nothing-burger “s**thole countries” fiasco in which the president is said to have uttered this remark while negotiating with Republicans and Democrats on a possible deal on immigration. Trump told Acosta to get outof the Oval Office.

So, this isn’t new for Acosta. President Trump's 2020 campiagn manager, Brad Pascale, described Acosta as a disgrace, whose press credentials should be pulled.

Jim @Acosta should immediately have his press credentials suspended. He is an absolute disgrace! @realDonaldTrump https://t.co/EY18ZeIq2h