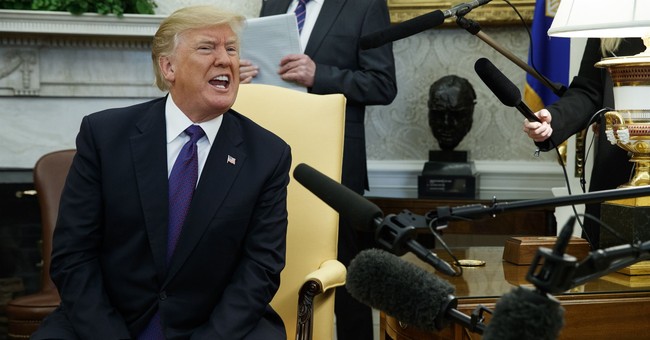 Yesterday, President Trump met with Nursultan Nazarbayev, the president of Kazakhstan. There was the pool spray with the two heads of state in the Oval Office. Trump gave some remarks, highlighting the economic ties between our two nations, while Nazarbayev thanked the president for the invitation to the White House and for the U.S.’s support for his nation’s independence at the close of the Cold War. With cameras flashing, it was a routine press/photo op. Then, CNN’s Jim Acosta asked President Trump about his views on immigration policy since a certain network became obsessed with the “s**thole countries” remark; Trump reportedly asked why are we letting in people from “s**thole countries” while negotiating with Democrats and Republicans on immigration. Acosta asked the president if he wanted immigration from just predominately white counties, which prompted the president to tell Acosta to get out of the Oval Office (via White House):

Trump actually points to Acosta and says that, by the way.

Acosta was reportedly threatened with being banned from future White House press sprays after he asked President Trump about what he meant regarding Sen. Gillibrand (D-NY) “doing anything” for campaign donations. It’s a line the president has used against everyone, but CNN tried to take the ‘he’s a sexist’ angle. Acosta shouted this at a no-question photo op, where Trump reauthorized the National Defense Authorization Act last December.

Acosta is known for picking fights with the White House, though he’s been taken to the woodshed in some high profile exchanges. The most prolonged and intense being with top Trump aide Stephen Miller during the green card revamp rollout last year. Trump and Acosta got into a tussle at the outset of his presidency, where the then-president-elect Trump called Acosta “fake news.”

Editor's Note: I mean to say, Gillibrand, not Warren. Sorry about that, folks.