Well, Primary Night Is Over And The Democrats Have Averted Total Disaster In California 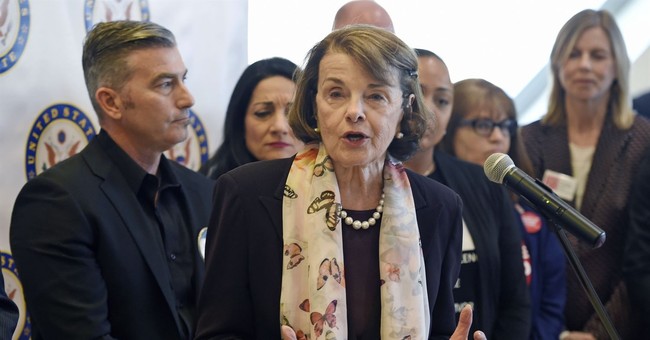 Well, we had something of a mini-Super Tuesday across the country last night. The June 5th primaries are over. While there were primaries in Alabama, Montana, South Dakota, New Jersey, New Mexico, Iowa, and Mississippi. All eyes were on California. The Democratic road to a House takeover goes through California and the deluge of Democratic candidates running in the various congressional primaries opened up the possibility that they could torpedo their own electoral chances. Why? Because California’s primary system sends the two top vote getters onto the general election, regardless of party. So, it’s possible in the Golden State, that the Democratic vote could have been so splintered to the point where only Republican candidates appeared on the ballot come November. It’s a lockout—and that caused the Democrats to panic, leading to last minute cash dumps that soared into the millions, along with flyers warning Democratic voters that they're looking at disaster if a consensus is not made soon on candidates.

Can Democrats chip away several seats from the GOP majority in the House, or will California's "jungle primary" system backfire on the party's efforts? @SteveKornacki walks us through what is at stake in the latest #trackingkornacki

Democrats are zeroing on several incumbent Republicans in the state, so a lockout in a few would’ve been welcome news. The Cook Political Report’s David Wasserman noted that prior to the ballots being counted, there were three possible races where Democrats could get locked out:

CA-39: This Orange County-based seat is probably where Democrats face the greatest risk of two Republicans advancing. Popular longtime GOP Rep. Ed Royce, the chair of the House Foreign Affairs Committee, is retiring from a district Trump lost by eight points. Republican Young Kim, a former Royce staffer and Assemblywoman, is the favorite to finish first in Tuesday's primary. But the race for the other runoff slot is a free-for-all.

A big reason why Democrats are nervous here is turnout: 22 percent of 39th CD Republicans have returned ballots versus 17 percent of Democratic voters (unlike in the 48th and 49th CDs, where Democrats have turnout out at higher rates). That could be because a GOP drive to recall Democratic state Sen. Josh Newman over his vote in favor of a gas tax increase has energized GOP voters in an almost entirely-overlapping state senate seat.

CA-48: Veteran GOP Rep. Dana Rohrabacher, who has faced criticism for his embrace of Russian president Vladimir Putin and Julian Assange, is likely to finish first in Tuesday's primary for this coastal Orange County seat. But the race for the second November slot is a three-way contest between two Democrats, real estate businessman Harley Rouda and stem cell researcher Hans Keirstead, and Republican attorney Scott Baugh.

Democrats feel more confident about their position here than they did several weeks ago. Not only have the DCCC's attacks on Baugh seem to have kept his support down, but Rouda appears to have gained late momentum amid questions surrounding Keirstead's exit from a UC-Irvine lab and Keirstead's fumbling of a question about his failure to vote in past Democratic primaries at a recent debate. Now, a Democratic shutout here would be a surprise.

CA-49: GOP Rep. Darrell Issa, who won by just 1,621 votes in 2016, is retiring after nine terms from this coastal San Diego County district. But his retirement may not have been a gift to Democrats. That's because his exit prompted four credible Republicans to join a field of four credible Democrats running here — and now, theoretically, any combination of parties is possible on the November ballot.

Also, there are no Dem lockouts at this time. None that are very close right now either. Granted votes are still to be counted, but at least we got a lot of ink spilt on it :)!

Lots of foaming at the mouth on networks right now re: potential for CA Dem lockouts. At the moment, #CA48 is in question, but to me the likeliest scenario looks like zero lockouts.

Dems currently pulling 50.6% of primary votes in #CA49 (and likely to go higher in late counting), a pretty good omen of their fall chances for a pickup there.

Breaking: Harley Rouda (D) still has a good shot at moving into 2nd place vs. Dana Rohrabacher (R) in #CA48 based on what we're seeing from E-Day votes.

Well, in the end, that did not happen.  It looks like the NRCC is going to have to spend money in California after all. As for the gubernatorial race, Democratic Lt. Gov. Gavin Newsom will face Republican John Cox.

As for the Senate, Sen. Dianne Feinstein will be facing President pro tempore of the California State Senate Kevin de Leon. The GOP was locked out of this race.

In New Mexico, the Democratic primary for the state’s 1stcongressional district saw Debra Haaland clinch victory. Haaland and her opponent Antoinette Sedillo Lopez both want to abolish Immigration and Customs Enforcement (via Newsweek):

On Tuesday, New Mexico voters could guarantee that at least one candidate who supports abolishing U.S. Immigration and Customs Enforcement is on the ballot in November.

ICE abolitionist candidates Antoinette Sedillo Lopez and Deb Haaland are both running in the state’s first congressional district, where a crowded field of six Democratic candidates are vying for the seat Michelle Lujan Grisham left behind to run for governor.

In Alabama, Rep. Martha Roby (R-AL), who endorsed and then withdrew her endorsement when the infamous Access Hollywood tape was released toward the end of the 2016 race, is being forced into a runoff after failing to clinch majority support against Bobby Bright. Roby garnered 39 percent to Bright’s 28 percent.

You can view the results from the rest of the states here.