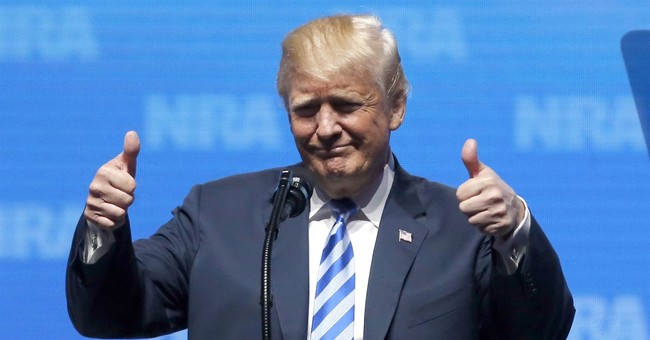 Dallas, Texas— Cruising through his first term, you’d think President Trump would be a bit more sluggish, a bit more tired, maybe a dash lower on the energy gauge. That’s not the case. In Dallas, the president addressed a packed crowd of Second Amendment supporters at the NRA’s annual meeting. In a wide-ranging speech, the president voiced his support for the Second Amendment, law enforcement, border security, the enforcement of our federal immigration laws, and torched the Russia investigation as a witch-hunt.

He vowed to protect the Second Amendment as long as he and Mr. Pence were in the White House, acknowledging that right now those rights were under siege. Trump said we believe in the rule of law, support for our men and women who work in law enforcement, and respect and pride for our history. We pledge allegiance to that flag and we all proudly stand for the national anthem, words that drew big applause from the crowd. In true fashion, the president said we’re finally putting America first.

He touted his tax cuts, stating just watch how well the GOP does in the 2018 midterms once the effects of it are fully know. Thus far, over 250 companies and over three million workers have benefitted from the legislation. Yet, Trump warned about being complacent. He said the old way was you win the White House, but your party loses the midterm. You win, take a breath, and become complacent. He vowed to never let that happen; we have to win in 2018. He touted the 3.2 million jobs that were created, unemployment dipping below four percent for the first time in this century, and his doubling of African American support. Trump has garnered 22 percent from this slice of America, up from 11 percent. The president gave Kanye West a shout out for this. The rapper tweeted his respect and love for the president, which caused a meltdown on progressive Twitter.

He also ripped the Russia probe quarterbacked by Robert Mueller, saying most of the indictments against former members of his campaign were from charges that predated the 2016 election. The reference to the probe drew boos from the crowd.

“We’re all fighting battles, but I love fighting these battles,” said Trump to a round of applause.

Trump said the Republican majority needed to be expanded this year, probably to help push along his immigration agenda, which has stalled. He vowed to protect out borders, build the wall, end catch and release, and declared that any politician who puts criminal illegal aliens over American citizens should be voted out of office immediately.

The president said that many “good political people” warned him from addressing this event, saying it would be viewed as controversial. He told the crowd his response was “bye, bye gotta get on the plane.” He vowed to always protect the Second Amendment, citing a longtime Texas slogan: come and take it.

It’s something to remember when we all go to the polls this November. The Democrats are primed and ready to go. They have a terrible anti-gun bill waiting in the wings. Let’s not give them a chance to revive it.