Midterms: Could Trump’s Tax Bill Punch Democrats In The Mouth? 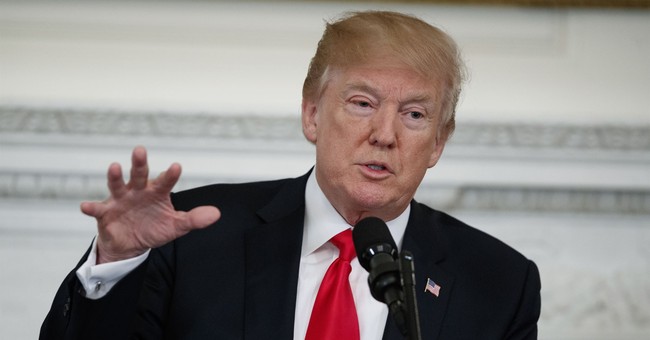 Is the GOP heading for disaster? It’s quite possible. In December, Mitch McConnell was reported to have privately said that 2018 could be a total disaster for the party. The historical trends are there. President Trump’s approval ratings are the best, so for all intents and purposes, we should pack it in, right? Yet, everything’s changed since 2016. I know—it’s a phrase you hear ad nauseum, but how many times have pollsters and pundits said Trump was finished. I was one of them, though unlike the rest of the bunch—I was happy to be proven wrong. There is no better prize than Hillary Clinton not being president. Could it be applied here? Earlier this month, Charlie Cook of the Cook Political Report went on MNSBC’s Lawrence O’Donnell’s show and delivered the grim news that a wave is coming. Speaking with GOP strategists privately, Cook said they concede if the election were held today—Democrats would win the House. He mentioned the heightened enthusiasm, the shellacking Democrats have delivered in Virginia, New Jersey, and their win in Alabama’s special election to fill Jeff Sessions’ vacancy. It’s comparable to Scott Brown’s win to replace the late Ted Kennedy in 2010, which was a GOP wave. Yet, that was also a year when the Democratic Congress passed the stimulus package and the unpopular health care reform Obamacare.

Still, Cook said it’s still up in the air. We have 250+ days until the 2018 midterms. That’s an eternity in politics. He admits that if Trump’s approval ticks up and the economy continues to improve, the GOP has a shot of hanging onto the majority. So, what about the string of state legislative races that Democrats have won in Trump districts? Is that a sign? Not really. David Wasserman, also of Cook Political Report, said that the turnout was miniscule in these races, though it shows the strength of Democratic enthusiasm.

Turnout in those state leg races has been microscopic, so energized Dems are only ones voting, hence huge swings. Harder for Dems to turn these places blue w/ much higher turnout in November. https://t.co/88Fw9o0mG1

This is also the reason why Dems didn't see as huge swings/gains in VA HoD races held in Trump zones. There was a gov race on ballot, so much smaller R voter dropoff.

In a twist of irony, the GOP tax could be the saving grace for the GOP. The reform package, which had dismal approval ratings when it passed in December, has ticked up in approval in recent weeks. In fact, 51 percent now approve of the tax bill after the Democratic propaganda on the bill was refuted with scores of companies giving bonuses to workers, increasing employee investments, and increasing philanthropic giving. Over three million workers have benefited from the law, which has created a better job creating and investing climate. Even MSNBC’s Chris Matthews noted that the GOP tax bill could save Republicans in 2018:

Also, attack Nancy Pelosi and frame the Democratic Party as out of touch and way too far to the left for the mainstream. This strategy has worked. Jon Ossoff in Georgia sixth congressional special election can probably attest to this. The GOP established this as their 2018 playbook at their annual meeting, which was held in West Virginia (via Real Clear Politics):

GOP lawmakers, here for their annual party retreat, point to improving poll numbers for their tax cuts and the decreasing Democratic advantage in the generic congressional ballot as signs that a tidal wave for the opposition party may not be forming. Republicans’ midterm plan is relatively straightforward: aggressively sell the individual benefits of their tax law and the broader strong economy, and scapegoat and attack Democratic Leader Nancy Pelosi.

Rep. Steve Stivers, the chairman of House Republicans’ campaign committee, presented the midterm outlook to his colleagues Thursday evening. Speaking to reporters before that briefing, Stivers admitted Democrats are “energized” and said Republicans were prepared for a “battle.” But he cited the tightening generic ballot and slight uptick in Trump’s approval ratings as positive signs.

The GOP tax bill coupled with Pelosi’s disparaging remarks about its benefits, like calling $1,000+ bonuses “crumbs,” sends a terrible message to working and middle class families, who never saw such relief under Obama. Moreover, the denigration of these bonuses from the liberal media and their Democratic counterparts has been equally atrocious.

The message on this is “you’re too poor to invest and start saving.” Yeah, and Republicans are the ones slammed as out of touch. The GOP is sure hoping that Pelosi continues to say insane things on tax reform (via USA Today):

“I think we’re going to hold the House and I think things are going to be OK for us,” the Ohio Republican told reporters ahead of a briefing with members of the House at the Republican retreat in West Virginia.

Republicans had “the right message” and success from tax reform, Stiver said.

But they also had Pelosi, who has "continued to say outrageous things.”

“Nancy Pelosi has stayed in the spotlight. Her 'crumbs' comment is something I think we can use pretty effectively,” Stivers said

As the GOP tax bill has become more popular, the generic ballot advantage Democrats had has chipped away. On top of this, you have Democrats possibly sabotaging their own chances. While doom and gloom for the GOP dominates headlines about the 2018 midterms, there’s a rather brutal civil war brewing among Democrats, which Guy touched upon. It seems like the DCCC is telling 2018 House candidates to not politicize mass shootings and peddle gun control measures, and avoid pushing single-payer health care. It seems in line with what Democratic operatives have been saying for a while, especially on single payer healthcare (via Politico):

Various Democratic and liberal groups are already taking steps to cull the primary herds. That work, in turn, is leading to the kind of intraparty bitterness and acrimony that proved costly to Clinton after her 2016 primary with Bernie Sanders. In Texas, for example, the DCCC dropped an oppo research bomb last week on a leading progressive candidate it judged to be a sure loser in November. She won’t forget that, and neither will her supporters.

In California, the primary problem is acute. Democrats are approaching flop-sweat status over a nightmare scenario: The state’s unusual top-two primary system could mean that no Democratic candidate at all appears on November ballots in several key races. Under the system, the top two vote-getters move on to the general election, regardless of party affiliation. With big fields of Democratic candidates threatening to splinter their party’s share of the vote—there are eight Democrats, for example, running in the seat left open by the retirement of Rep. Ed Royce, an Orange County Republican—it’s a very real prospect that two Republicans will face off for a seat or two in November.

“We have a population problem,” Eric Bauman, the California Democratic Party chairman, warned delegates at the state convention on Saturday. “We may be aced out of seats that are primed, set and ready for us ... where the voters in those districts are ready to elect a Democrat.”

In September, Frank Bruni of The New York Times wrote about Rep. Joe Kennedy III (D-MA) saying he’s not betting on 2018 concerning the crop of candidates running this year. Bruni also warned Democrats that they should be prepared to lose:

Those who look to the past to predict the current political moment do so at their folly,” said Representative Joe Kennedy III, one of the regional vice chairmen of the D.C.C.C. So while he told me that he’s enormously heartened by the quality of Democratic candidates being groomed for House races, he’s not placing wagers.

That’s wise, considering: Democrats must recover from a breathtaking decline, during the Obama years, of the party’s representation at every level of government below the presidency. The party holds only 15 of 50 governor’s offices. While Republicans control both the governorship and the legislature in 26 states, Democrats have that monopoly in just six.

“We didn’t get here overnight,” Rosen said, reverting to management-of-expectations mode. “I think it’s unrealistic to think we’re going to turn it around in a single election.”

And it’s irresponsible not to think in terms of 2020 as well as 2018. Nothing about Trump’s first term makes a second seem survivable, let alone advisable, so the best way to go into the midterms is with an eye toward preventing one. That means resisting jubilant forecasts that allow modest gains a year from November to be spun as an immodest comeuppance.

Republicans are expert at affixing a “kick me” sign to frustrated Democrats. Democrats need practice at not wearing it.

So, a wave could crash and wipeout the GOP, or the tax bill could punch them in the mouth. Even left-leaning Bookings added that there's simply too much time between now and Election Day to predict anything with certainty.

“The president’s job approval could go up and the generic ballot could narrow. If that happens, there probably would not be a wave despite the Democrats’ strong pool of candidates,” wrote Michael Malbin for the think tank.

POLITICO poll: Trump approval rises to 45/51, GOP gains on generic ballot (from down 10 in December to down 4 now), and voters give R's significant advantages on economy & national security. Biggest advantage Dems have right now is overwhelming intensity: pic.twitter.com/uFdYJD8705

Per Morning Consult poll: GOP with 13-pt edge on national security over Ds; 9-point edge on economy; 6 pt edge on jobs; +6 on immigration (!).

Even Quinnipiac, the most D friendly of the polls, has Trump hitting 40. And D advantage down to single-digits ---> https://t.co/1D9YkMzKID

On top of Pelosi’s nonsense, the GOP tab bill’s success, and the Democratic infighting, there’s gun control. With the recent school shooting at Marjory Stoneman Douglas High School, Democrats have put forward a bill that all but bans firearms in the U.S. It states that any semi-automatic with a detachable magazine that holds more than ten rounds will be barred from being sold, transferred, or imported. As it looks more and more like local, state, and federal authorities did not do their jobs in stopping the shooter, it makes clear what any Second Amendment push from the Left truly is: the chipping away of our civil rights. If Democrats want to trash working families’ bonuses, push proposals that will eviscerate the Second Amendment, and dabble in abortion extremism—I say bring it on. And yes, they should be prepared to lose. Yet, again, the same principle applies: we have a long way to go until Election Day.

It is worth doing the apples-to-apples comparison: Was D+13 in mid-January, D+17 in early January. Polls mostly tell same story: GOP prospects improving, but far from out of the woods. https://t.co/emEaUpzoDZ

Though there are some positive signs that a blue wave prediction could be premature. In North Carolina, Republicans fared well in a recent poll:

The Meredith College poll found that there appears to be no difference in enthusiasm among Democratic, Republican and unaffiliated voters in North Carolina.

The poll, taken between Jan. 21 and 25, found not only that preferences for congressional and legislative candidates appear to be relatively equal, but that voters expressed a slight preference for Republican candidates.

“The analysts’ claim of a blue wave in North Carolina: right now it would look like a ripple,” if the election were held today, said David McLennan, a Meredith professor and director of the poll.

The special election in PA-18 on March 13 could offer a better glimpse of what's to come. It's considered a toss-up race.