Unemployed Americans: It Would Be Easier For Us To Find A Job With Less Illegal Immigration 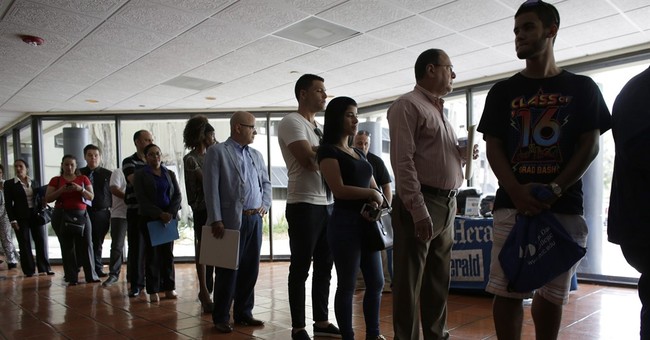 While the economic report for May was not as strong as it should be, we still added 138,000 jobs. Consumer confidence, which reached a nine-year high post 2016 election, has dipped slightly but remains at very healthy levels. Small business owners’ confidence also reached its highest levels since 2007. Yet, what about those people who haven’t been able to find a job? Well, politically, they favor Hillary Clinton, but want less illegal immigration and Obamacare out of their lives. Second, they haven’t succumbed to doom and gloom. Though they may still be in the waiting lines, 92 percent are hopeful. Express Employment Professionals, a headhunting organization, released a survey last month that polled 1,500 unemployed Americans over the age of 18 from March 14 to April 6 to gauge their feelings on the current economic climate.

Bob Funk, the CEO for Express Pros, said in a statement that while he’s alarmed that one-third of the American workforce has said they’ve given up, “there are signs of a positive trend from previous years; fewer have given up, more are hopeful, fewer blame the economy and fewer are unemployed due to layoffs.” Funk was the former chairman of the Federal Reserve Bank of Kansas City.

Now, in terms of politics, the unemployed favored Hillary over Trump in a 35/25 split. Thirty-four percent did not vote. Yet, even with unemployed America tilting towards Clinton, they want Obamacare gone by a 57/43 margin. Also, a substantial majority also thought that a crackdown on illegal immigration would help them find work by a 58/42 margin. Concerning whether government should spend more on a jobs program or cut corporate tax rates to spur job creation, more government spending is preferred but by a slim 52/48 margin. It’s almost down the middle on that question.

Yet, one troubling indicator is the direction of the country; 40 percent of the unemployed said we were heading down the right path compared to 60 percent who disagreed. At the same time, while these voters broke for Hillary, they’re more aligned with Donald Trump on immigration and health care, which are two huge issues facing the country today. There are many inroads with these voters on economic issues and if Democrats craft a populist, job creating-centric agenda over the next couple of years—these people will vote for them. As Real Clear Politics’ Sean Trende has said in prior discussions about elections and demographics, there are many ways to skin the electoral cat. Republicans resonate with this group on illegal immigrants and Obamacare, while Democrats could gain traction with a serious job program. For now, the political Left seems more worried about Russia and whether we’re all going to die from global warming now that we’re withdrawing from a non-binding agreement with Europe. So, seriousness is not a quality visible in today’s Democratic Party at present.