One Word That Describes Opposition To Trump's SCOTUS Nominee: Splintered 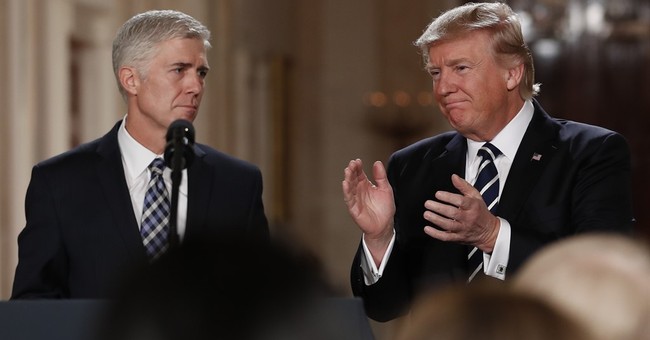 Yes. No. Maybe. That appears to be the Democratic response to inquires regarding whether they will go to war with President Trump’s Supreme Court nominee, Judge Neil Gorsuch of the Tenth Circuit Court of Appeals. Sen. Jeff Merkley (D-OR) isn’t shying away from his intention to go the mats with Gorsuch. He has long said that anyone who isn’t Merrick Garland will be fought to the death. Then, there are some Democrats who are strict adherents to the institutional protocols of the Senate and who will show deference for the president’s nominees. There’s also the fear that the GOP would nuke the filibuster rules for Supreme Court nominations, further degrading the institution thanks to former Sen. Harry Reid's (D-NV) tenure as majority leader. Right now, non-Supreme Court presidential appointees are confirmed through a simple majority. With Trump occupying the White House, there is no doubt that Democrats regret going nuclear on those rules in 2013, with some Democrats having gone on record admitting that it was a mistake. Education Secretary nominee Betsy DeVos, Treasury Secretary nominee Steve Mnuchin, and Health and Human Services nominee Rep. Tom Price (R-GA) would have all been filibustered and possibly blocked if those rules had been left in place.

Gorsuch is as smart as he is conservative, and he writes elegantly. Hardiman is a friend of Trump's sister. Whom do YOU think T will name?

While Merkley leads the charge to stop Gorsuch, there are mounting factors pointing to dying on this hill probably isn’t the best idea for Democrats. For starters, Gorsuch is incredibly qualified to fill the late Antonin Scalia’s vacancy. He’s virtually a clone of the conservative jurist, who also shares a skill for writing legal opinions. Gorsuch’s work as a jurist has earned him respect and adoration from both sides of the aisle, along with a reputation of being “a consensus builder,” according to Law Professor Melissa Hart of the University of Colorado. The majority of the American people also wants him to be confirmed. CNN had slightly lower numbers, but the narrative is clear: he made a good impression.

Second, as the PBS NewsHour and other outlets have noted, this doesn’t change the composition of the court. Gorsuch is just replacing Scalia, meaning that there will be four conservatives, four liberals, and one moderate (Kennedy). Maybe, as the saying goes, keep the powder dry for when another vacancy occurs, which is possible under this presidency.

Concerning preliminary attacks against Gorsuch, the Left has failed miserably. They tried to say that he started a “Fascism Forever” club in high school, which had a shelf life of all of eight minutes before former classmates said it was a total joke. As for shots at his record, liberal super PAC American Bridge, headed by Clintonite David Brock, also fell hilariously flat. That sort of thing happens when you get the opinions wrong. National Review’s Ed Whelan took Bridge’s claims to the woodshed:

In labeling Gorsuch a “threat to privacy” (p. 14), American Bridge writes: Gorsuch also wrote a dissenting opinion in the United States v. Carlos [sic] case, in which he argued that police ignoring a “no trespassing” sign did not violate the 4th amendment.

American Bridge gets things backwards. Gorsuch did indeed dissent in United States v. Carloss. But it was the majority opinion in that case that denied the defendant’s motion to suppress evidence that the police discovered after going on the homeowner’s property. Gorsuch argued in a lengthy dissent that by posting “No Trespassing” signs all over her property, the homeowner had refused to consent to the police entering her property.

American Bridge faults Gorsuch for his opinion in Wilson v. City of Lafayette in which he “claimed that all police officers had immunity unless they were ‘plainly incompetent’ or knowingly violating the law” (p. 10). American Bridge manages not to notice that Gorsuch’s “claim” is in fact a direct quotation from the governing Supreme Court authority, Malley v. Briggs (1986).

Adding to the media misfires (i.e. the “Fascism Forever” club) you had Tom Brokaw criticizing the loony left setting UC Berkley on fire over Breitbart editor Milo Yiannopoulos, calling their antics outrageous. He said that young people come to him and voice their outrage, though he always reminds them that rage isn’t a policy. You need to figure out what you’re going to do. As the Gorsuch fight draws nearer, Brokaw conceded that this isn’t the fight to pick (via

The fact is that this man has a very distinguished background in the judicial world. He has a doctorate from Oxford. He is — I have friends in the federal judiciary who don't agree with his philosophy, but say there is not a better judge in the federal circuit right now than him. So why pick that as a fight?

MSNBC’s Kristen Welker took a different approach, asking White House Communications Director and Press Secretary Sean Spicer how they will get Schumer onboard concerning the Gorsuch nomination since he called the Senate Minority Leader "

“Let me just ask you about the confirmation hearings. How does the President plan to get Chuck Schumer on board with his pick for the Supreme Court, Neil Gorsuch, when he has referred to him as a clown and has accused him of fake tears,” asked Welker at the press briefing on February 1.

Sen. Chuck Schumer (D-NY) said that he would hold Gorsuch to the 60-vote threshold, which he erroneously said was the standard for Supreme Court nominations, which Guy wrote about. Schumer later corrected his remarks. The GOP might have the votes to end the debate, according to Rebecca Berg of Real Clear Politics:

“I think it’s likely he’ll be confirmed,” said one Democratic Senate campaign operative, “and there will be a larger fight on the next one.”

Republicans need only eight Democrats to join them to stamp out any filibuster, and they are already approaching that tally. Those senators could still oppose Gorsuch’s nomination, but a standoff would be averted — and, with Republican control of the chamber, he would likely win the final simple-majority vote.

Even Democratic senators who are not running for re-election have suggested they would support such a vote to end debate, if not necessarily ultimate confirmation for the nominee.

“I am still angry about Merrick Garland. But I believe that this nominee ought to have a hearing and a vote,” said Sen. Richard Blumenthal of Connecticut. “We should not repeat the Republican wrong. Two wrongs don’t make a right.”

Within Democratic circles, the opposition to Gorsuch is fraught with danger (not that I’m complaining about that) since Schumer had to balance the harnessing the grassroots energy of the hyper-emotional progressive base that’s infuriated over Trump’s win and not overreach and cost Democrats more seats. Some of those seats are the ones mentioned above (via WaPo):

Alongside Schumer’s concern for these vulnerable Democrats is a sudden burst of energy on the left, not only to express deep-rooted anger at Trump but growing impatience with congressional Democrats. If they don’t push far enough, the liberals will be angry. If they push too far, they risk losing seats.

They also risk provoking Republicans. If Democrats try to block Judge Neil Gorsuch, for instance — Trump’s nominee for the Supreme Court — Republicans have the ability to eliminate the filibuster, which would enable Gorsuch’s confirmation on a simple-majority vote.

All of it puts Schumer in a pretty tight squeeze trying to protect a diminished minority caucus, support the far left and at the same time temper expectations of what Democrats can do.

Schumer has another top goal, as well: to keep Trump at his already historically low approval ratings for a new president.

Yet, Berg added that an obstruction fight waged on behalf of Senate Democrats could backfire, quoting a Democratic operative saying that it could swing public opinion on this matter in favor of the White House “if Trump stops doing all the other things he’s doing.” She also said that a prolonged fight could put a spotlight on the vulnerable red state Democrats running for re-election—Manchin, McCaskill, Heitkamp, and Tester—instead of Gorsuch.

Sen. Dianne Feinstein (D-CA) is to meet with Gorsuch today, though Senate Democratic leadership, including Schumer, refused to meet with the Supreme Court nominee last week.

President Trump said that the ball is in Senate Majority Leader Mitch McConnell’s court regarding handling possible Democratic antics, but said if the opportunity presents itself, go nuclear.

The Left is going to rehash old and new arguments. How the Supreme Court seat has been stolen, how the GOP should give Garland a hearing etc., but it’s irrelevant. They already made these arguments before with no damage inflicted on Republicans. Also, from the polls, a majority wants Gorsuch confirmed, so this stolen seat talking point just could be another one limited to the progressive urban bubble. McConnell’s gamble of using the Biden rule as precedent to not confirm Garland during the 2016 election paid off, and a substantial proportion of the electorate voted for Trump based on Supreme Court anxiety. Democrats don’t have the precedent, only raw anger. Well, if they want to look back in history again, The Wall Street Journal’s editorial board used Schumer’s own words to show that even he didn’t want Supreme Court nominees confirmed in the last year of a presidency:

The “theft” is supposedly the GOP Senate’s refusal last year to vote on President Obama’s nomination of Merrick Garland to fill Antonin Scalia’s seat. But the standard of not confirming a Supreme Court nominee in the final year of a Presidency was set by . . . Democrats. And by no less a Beltway monument than the current Senate Minority Leader, Chuck Schumer.

“We should not confirm any Bush nominee to the Supreme Court, except in extraordinary circumstances,” Mr. Schumer declared in a July 2007 speech to the American Constitution Society. Democrats then held the Senate and Mr. Schumer was putting down a marker if someone on the High Court retired. George W. Bush didn’t get another opening, but Mr. Schumer surely meant what he said.

The Democratic theft standard goes back further to Joe Biden’s days as chairman of the Senate Judiciary Committee. In June 1992 in President George H.W. Bush’s final year, Robber Joe opined that the President “should consider following the practice of a majority of his predecessors and not name a nominee until after the November election is completed.”

Judge Gorsuch is such a distinguished nominee that he ought to be confirmed 100-0, but if Democrats try and fail to defeat him, the world should know that they are the authors of their own political frustration.

So, the Democrats have to balance their own ranks, the perception of the nominee, which is good, his record, which is impeccable, and whether this is worth the fight. That doesn’t appear to be the case, which is why the Democratic opposition is so splintered.