Silver Linings: Dubya Would Not Hurt A Jeb Presidency 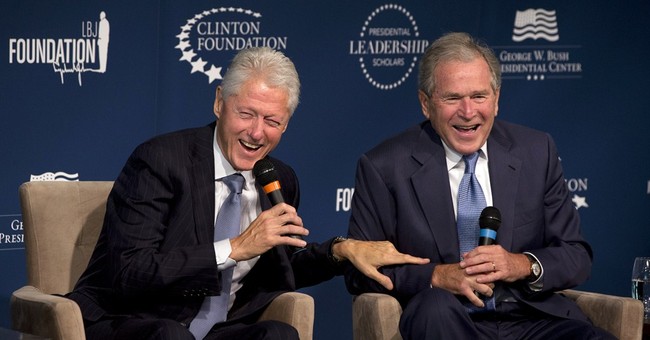 If Jeb Bush manages to win the 2016 nomination–and the presidency–having George W. Bush as an adviser wouldn’t be viewed as a bad thing. In a Bloomberg Politics/Des Moines Register poll, 57 percent of Iowa voters said it would be mostly a good thing, compared to 33 percent who disagreed. With a hypothetical Clinton [Co-] presidency, Bill is almost virtually viewed to be a good thing for Hillary in the White House, with 83 percent saying his counsel would be mostly a good thing. Only nine percent said it would be a bad thing.

Regarding Bush, it shouldn’t be too shocking that he’s not viewed as toxic anymore. As Cortney wrote earlier today, Bush is polling higher than Obama, despite the fact that he left office with a dismal 40 percent approval rating. George W. Bush’s rehabilitation began in 2013, when Gallup found that 49 percent of Americans viewed him favorably. At the same time, the American people tend to generally like former presidents over time.

Yet, regarding the Bill and George factor, there are still some who are skeptical:

Poll respondent Sarah Rynearson, an independent who plans to caucus with Republicans, is similarly at ease with the idea of Bush being advised by his brother.

“I think it would be a great idea, because I think his brother was a great president,” said Rynearson, 36, who delivers meals to the elderly in Waterloo, Iowa.

“I think that George W. Bush did a very poor job at trying to unify the country around commonly held beliefs,” Stanley said, adding that the former president's foreign policy decisions were “part of” what should preclude him from serving as an adviser to his brother. “Dick Cheney is another part. Donald Rumsfeld is another. He just had advisers that were pretty extreme.”

“They've both already been there and done that before. They seem to be a good team, and work together really well together,” said Democrat Mickie Franklin, 33, a Transportation Security Administration worker who lives in Nevada, Iowa. “She seems like a really strong-willed lady. And she seems like if someone she knew felt very strongly about something, she might take their opinion, but not necessarily go with what they want. I think there's nothing wrong with getting advice from him.”

Ben Frazier, a 21-year-old Democrat and political science major at the University of Iowa in Iowa City, voiced reservations.

“It's going to be important for her to think on her own and show that she has the necessary experience to make her own decisions,” he said. “I feel like he's going to want to be more involved than he should be. Politically speaking, Bill Clinton is out of his prime.”

Bloomberg also noted that Jeb has stumbled on Iraq and other negative aspects with his family name, while Clinton has had to run away from Bill regarding three-strike laws, gay marriage, and free trade agreements.

The poll had 437 likely Democratic and 402 likely Republican Iowa caucus goers. Over 4,000 voters in Iowa were contacted.