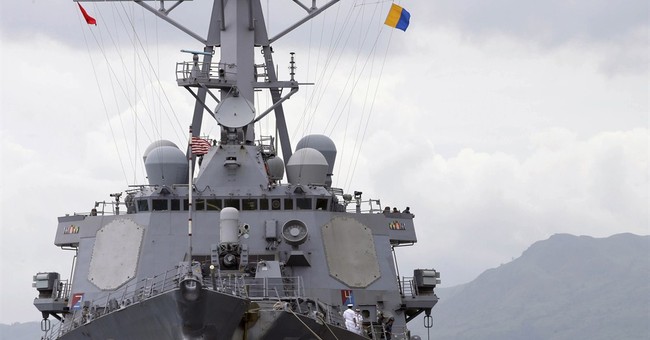 The United States is committed to stopping Iran from arming the Yemeni Houthi rebels with “game-changing” armaments. The Wall Street Journal reported that the U.S.S. Sterett searched a vessel suspected of containing surface-to-air missiles this month, which would certainly impact the effectiveness of the ongoing Saudi air campaign. Nevertheless, the Saudi and Egyptian navies are the main actors enforcing the blockade of the country that was once touted by the Obama administration as the blueprint for future counterterror operations (via WSJ):

An American destroyer in the Red Sea this month boarded a freighter the U.S. suspected of delivering Iranian weapons to Houthi rebels in Yemen, American military officials said.

The USS Sterett’s search of the Panamanian-flagged Saisaban on April 1 came up empty. But the officials said it marked the U.S. Navy’s first boarding operation in an expanding campaign to ensure Iran doesn’t supply game-changing weapons such as surface-to-air missiles that would threaten Saudi-led airstrikes on the Houthis.

The airstrikes began two weeks ago after Houthi rebels, who have taken over the capital and overrun much of the country, forced American-backed President Abed Rabbo Mansour Hadi to flee the country.

U.S. and Saudi officials say Tehran has been providing arms, weapons, training and funding for the Houthis for years—allegations Iran denies. A senior defense official said the U.S. knows Tehran is trying to supply the militant group with surface-to-air missiles.

Since the Red Sea search, the U.S. military has stepped up its surveillance in the region so it can keep a closer eye on what Iran and the Houthis are doing to turn the tide in their favor, the U.S. officials said.

More than a dozen nations have warships in the region, with Saudi and Egyptian sailors taking the lead in enforcing a naval blockade that has limited the Houthi fighters’ ability to secure more firepower from outside Yemen, U.S. military officials said. And weeks of Saudi-led airstrikes have damaged many runways in Yemen, making it difficult for Iran to fly weapons into the country.

So far, the military officials said, the coordinated military operations appear to have deterred Iran from taking major risks to aid the Houthis.

There’s a risk that the Yemen crisis could devolve into a regional war. The Arab League has already agreed to mobilize an intervention force of 40,000, with Saudi Arabia saying–if they do invade–that they will not leave until Houthi fighting capabilities are irreparably degraded.