Brian Williams: Uh, That Story About Me Getting Shot Down In A Helicopter Was A Lie 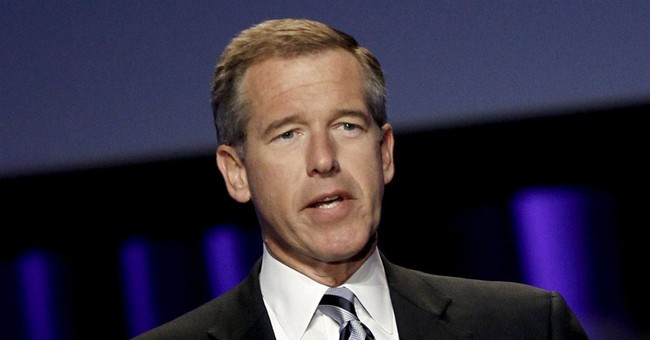 It’s confession time for NBC’s Brian Williams. The story about Williams and his news team riding in a Chinook helicopter that was shot down by a rocket-propelled grenade in Iraq 12 years ago was a lie. It never happened (via Politico):

On Friday night's [ Jan. 31] broadcast, Williams cited "a terrible moment a dozen years back during the invasion of Iraq when the helicopter we were traveling in was forced down after being hit by an RPG. Our traveling NBC News team was rescued, surrounded and kept alive by an armor mechanized platoon from the U.S. Army 3rd Infantry.”

One crew member responded to the story on Facebook the following day, writing to Williams, "Sorry dude, I don't remember you being on my aircraft. I do remember you walking up about an hour after we had landed to ask me what had happened."

This week, crew members of 159th Aviation Regiment’s Chinook helicopter also told Stars and Stripes that Williams had not been in the shot-down helicopter but had arrived an hour later.

On Wednesday, Williams conceded that he was not onboard the shot-down helicopter, but he told Stars and Stripes he did not intentionally make the mistake.

“I would not have chosen to make this mistake,” Williams said. “I don’t know what screwed up in my mind that caused me to conflate one aircraft with another.”

Here's what Williams and the network had been saying about the event until recently:

Williams has since apologized for this fabrication twice, once on Facebook; and most recently on tonight’s broadcast of NBC’s Nightly News.

To Joseph, Lance, Jonathan, Pate, Michael and all those who have posted: You are absolutely right and I was wrong. In fact, I spent much of the weekend thinking I'd gone crazy. I feel terrible about making this mistake, especially since I found my OWN WRITING about the incident from back in '08, and I was indeed on the Chinook behind the bird that took the RPG in the tail housing just above the ramp. Because I have no desire to fictionalize my experience (we all saw it happened the first time) and no need to dramatize events as they actually happened, I think the constant viewing of the video showing us inspecting the impact area — and the fog of memory over 12 years — made me conflate the two, and I apologize. I certainly remember the armored mech platoon, meeting Capt. Eric Nye and of course Tim Terpak. Shortly after they arrived, so did the Orange Crush sandstorm, making virtually all outdoor functions impossible. I honestly don't remember which of the three choppers Gen. Downing and I slept in, but we spent two nights on the stowable web bench seats in one of the three birds. Later in the invasion when Gen. Downing and I reached Baghdad, I remember searching the parade grounds for Tim's Bradley to no avail. My attempt to pay tribute to CSM Terpak was to honor his 23+ years in service to our nation, and it had been 12 years since I saw him. The ultimate irony is: In writing up the synopsis of the 2 nights and 3 days I spent with him in the desert, I managed to switch aircraft. Nobody's trying to steal anyone's valor. Quite the contrary: I was and remain a civilian journalist covering the stories of those who volunteered for duty. This was simply an attempt to thank Tim, our military and Veterans everywhere — those who have served while I did not.

And, tonight on Nightly News [emphasis mine]:

On this broadcast last week in an effort to honor and thank a veteran who had protected me and so many others after a ground fire incident in the desert during the Iraq invasion I made a mistake in recalling the events of 12 years ago, it did not take long to hear from some brave men and women and the aircrews who were also in that desert. I want to apologize, I said I was traveling in an aircraft that was hit by RPG fire. I was instead in a following aircraft. We all landed after the ground fire incident and spent two harrowing nights in a sandstorm in the Iraq desert. This was a bungled attempt by me to thank one special veteran and by extension our brave military men and women veterans everywhere, those who have served while I did not. I hope they know they have my greatest respect and also now my apology.

Uh, wait a second; for years, Williams–and NBC–made the claim that the now-discredited “RPG took down my chopper” story had happened. Yet, did Williams lie again in his on air apology? Lance Reynolds, whom Williams addressed in his Facebook apology and was onboard the downed Chinook, wrote on the social media site that Williams left after he had asked what happened on another flight of Chinook's heading into Kuwait; they had to do their Nightly News report. I'm sure we'll find out more in due time.

Another network in the big three–CBS News–was guilty of journalistic malpractice back in 2004, with Dan Rather’s report about George W. Bush’s Vietnam-era service in the Texas Air National Guard. What became know as the Killian Documents, named after then-Bush’s squadron commander, the late Lt. Col. Jerry B. Killian; detailed a less than flattering account of the former president’s service. It was debunked thanks in part to Hot Air’s Allahpundit and other conservative bloggers.

A review board was established and found that basic journalistic practices were not followed:

A report issued by an independent panel on Jan. 10, 2005 concluded that CBS News failed to follow basic journalistic principles in the preparation and reporting of this Sept. 8, 2004 broadcast.

Dan Rather left the network. CBS News producer Mary Mapes was fired, and the network asked for the resignation of other top producers at 60 Minutes. Thus, Rathergate was born. NBC News now has Chinook-gate (I guess).

Oh, and Brian Williams; you should be ashamed of yourself. Dan Rather; do I really need words for his actions?

I know our friends at the Media Research Center are going to have a ball with this one.

UPDATE: I almost forgot about Hillary Clinton’s 2008 remarks that she landed in Bosnia under sniper fire. Yep, that was a lie as well (via CNN):

Sen. Hillary Clinton said she "misspoke" last week when she gave a dramatic description of her arrival in Bosnia 12 years ago, recounting a landing under sniper fire.

Clinton was responding to a question Monday from the Philadelphia Daily News' editorial board about video footage of the event that contradicted her assertion that her group "ran with our heads down" from the plane to avoid sniper fire at the Tuzla Air Base.

She said when she arrived in Bosnia on March 25, 1996, "I remember landing under sniper fire. There was supposed to be some kind of a greeting ceremony at the airport, but instead we just ran with our heads down to get into the vehicles to get to our base."

But news video footage of her arrival at Tuzla shows Clinton, then the first lady, calmly walking from the rear ramp of a U.S. Air Force plane with her daughter, Chelsea, then 16, at her side. Both Clintons held their heads up and did not appear rushed.