Officer Rafael Ramos Has Been Put To Rest, Thousands Gathered To Pay Respects 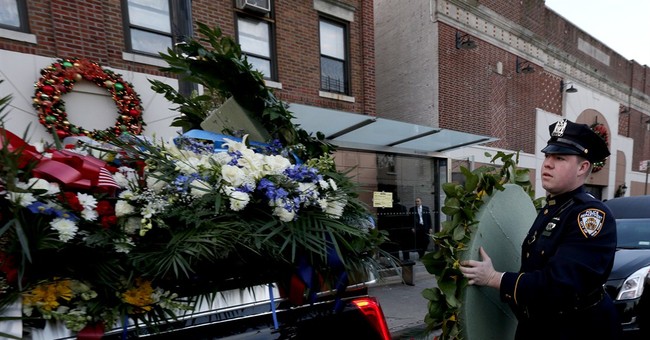 Following weeks of demonstrations in the aftermath of the Staten Island Grand Jury’s decision not to file charges against officers in the Eric Garner case, Gov. Cuomo praised police in his remarks:

“I frankly was amazed at the discipline and professionalism that the NYPD demonstrated. The NYPD protected the right of freedom of speech even though they themselves were the target of false and abusive chants and tirades by some. What a beautiful testament to their professionalism.”

Vice President Biden told the Ramos family, “Our hearts ache for you.” He also reassured Ramos’ sons that he would always be with them in their lives:

Justin, and Jayden, you’ve shown tremendous courage and character in these past few days. You are your father’s sons. And he was so, so very proud of you from everything that I have heard. And just know, as hard as it is to believe, he will be part of your life the entirety of your life.

When Mayor de Blasio delivered his remarks, which lasted about ten minutes, he also said “our hearts are aching today” (via NYT):

At the most difficult time in his mayoralty, with his leadership questioned by police and protesters alike, Mr. de Blasio appeared to take pains to avoid standing out.

There were no bold pronouncements, and the mayor did not promise — on this day, anyway — to lead the city out of its current strife. After telling the family of the officer, Rafael Ramos, that “our hearts are aching today,” Mr. de Blasio offered plain-spoken praise for the Police Department, whose support for him, never strong, has crumbled in recent weeks.

“I extend my condolences to another family, the family of the N.Y.P.D. that is hurting so deeply right now,” the mayor said. In a 10-minute speech, he quoted from the New Testament, saying, “Blessed are the peacemakers,” and described how police officers “help make a place that otherwise would be torn with strife a place of peace.”

At the same time, anything becomes highly politicized once Al Sharpton decides to get involved.

Patrolmen’s Benevolent Association President Pat Lynch commented on this incident saying, “The feeling is real, but today is about mourning, tomorrow is about debate.”

Yet, we shouldn’t expect too much from the mayor, especially when he arrived late to the wake of Officer Rafael Ramos on December 26. In fact, some publications, like the New York Times, figured he had skipped the event. They issued a correction once the mayor showed up. He was reportedly two hours late.

An earlier version of this article incorrectly said that Mayor Bill de Blasio did not attend the wake. Mr. de Blasio had not at the time that version of the article was published, but he did attend later in the evening.

The mayor’s schedule wasn’t posted until 9pm, which was around the time de Blasio arrived at the Queens church where the wake was being held.

Back in November, de Blasio’s history of lateness was starting to undermine his mayoralty (via WSJ):

New York City Mayor Bill de Blasio ’s chronic tardiness—he was late this week to a memorial service for Rockaways air crash victims—has reignited questions about his management skills and his image as a leader.

On Wednesday [Nov 12, 2014], Mr. de Blasio apologized for arriving late to a service commemorating the 13th anniversary of the crash of American Airlines Flight 587 in Queens. The victims’ family members described his tardiness as disrespectful and hurtful.

The mayor’s lateness routinely exceeds allowances for city traffic and his busy schedule. He has a long history of tardiness, from infuriating people in Italy gathered for a speech in his ancestors’ hometown this summer to keeping U.S. Sen. Charles Schumer waiting for him at an event in Brooklyn last week.

Harris Stratyner, a psychologist and clinical associate professor at the Icahn School of Medicine at Mount Sinai, said tardiness could reflect poor organizational skills, or an inability to shift easily among tasks, or, a sign of passive aggressiveness, whereby a late arrival is a deliberate slight to others.

Mr. de Blasio isn't the only mayor, or elected official, with a record of lateness. In the 1960s, after Mayor John Lindsay showed up an hour later to a news conference, journalists left the room en masse as a sign of protest, recalled George Arzt, then a reporter for the New York Post.

“We were very much annoyed by Lindsay always being late,” Mr. Arzt said. “After that, he would only be late by a half hour,” he added with a laugh.

Mr. Arzt, who served as a consultant on Mr. de Blasio’s 2009 successful campaign for public advocate, said Mr. de Blasio was late to events then, too.

The article mentioned how Mayors, Koch, Guiliani, and Bloomberg were always aware of being prompt in their mayoral duties; Koch thought it was an indication of your managing style and organizational skills.

I guess we have an explanation on the botched snow removal in the aftermath of Winter Storm Janus last January.

A history of de Blasio’s lateness was documented by New York magazine:

How late? Over an hour

What: Press conference to name the first deputy mayor

What: Press conference to name the police commissioner

What: Press conference to make an educational announcement

What: Interview with the New York Times How late? 35 minutes

What: JetBlue flight from JFK to Puerto Rico

What: Memorial for victims of Flight 587

Excuse: He had a “rough night” and the boat he was traveling on got stuck in some bad fog.

Is de Blasio too late to mend the fences with the NYPD? Time will tell.