Rand Paul's 2016 Decision Could Be A Messy One...Legally 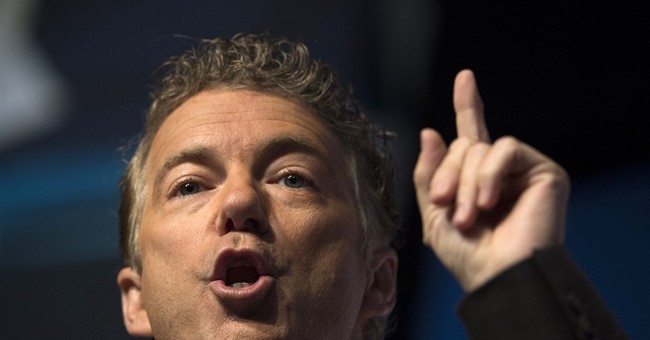 It’s official; Sen. Rand Paul will run for a second term in the U.S. Senate. The Lexington-Herald Leader reported that the freshman Kentucky Senator cites “unfinished business” as his reason to seek a second term.

"I think that there's unfinished business in the sense that I ran for office because I was frustrated that the country was accumulating so much debt and that I was worried that it was not only a drag on the economy but ultimately I think a threat to the country," Paul said. "I've been here for four years in the minority party, and I think the Democrats have continued to make it worse. We still borrow a million dollars a minute."

So far, no Democrat has come forward to say they will challenge Paul in 2016.

As to whether Sen. Paul will launch a 2016 bid for the White House, we will have to wait on the decision for another four to five months. Yet, you have to wonder what the game plan is on this front; you can’t run for two federal offices at the same time according to Kentucky law–and Republicans failed to win a majority in the state legislature to facilitate a change in the law.

Regardless, Paul’s team has worked a legal framework so he could run for both offices. At the same time, they don’t want to drag this case into the judicial system (via National Journal):

Rand Paul's brain trust has spent months developing an exhaustive political and legal battle plan to ensure he can run for both Senate reelection and the White House in 2016—despite a Kentucky law that suggests otherwise.

They have developed backup plans for their backup plans in an all-out effort to safeguard Paul's Senate seat should he falter in the presidential sweepstakes. The contingencies range from changing Kentucky into a presidential caucus state to filing a lawsuit challenging the law, from daring Kentucky Secretary of State Alison Lundergan Grimes to keep him off the ballot to taking her out next November if she does.

They argue the Kentucky statute is unconstitutional when applied to federal races, citing the U.S. Supreme Court tossing out state-imposed federal term limits. Other national candidates, including Paul Ryan in 2012 and Joe Biden in 2008, have successfully sought lower federal offices simultaneously. But Paul's team wants to avoid fighting a court battle, if possible.

Currently, the top option Team Rand sees is to shift Kentucky's May 2016 presidential primary to a caucus in March, which would technically mean Paul isn't on the same ballot and thus could circumvent the restriction.

The shift would have another advantage for Paul: moving up his home state in the nominating calendar. His team is eyeing March 16—the earliest date a winner-take-all caucus could be held without penalty, per Republican National Committee rules.

But any change would have to be approved by the sprawling 300-member board of the Republican Party of Kentucky, filled with local party officials. No plan has been formally presented yet.

Two dates circled on the calendars of Paul's political advisers make beating Grimes an alluring option: Jan. 4, 2016 (the day Grimes's term ends) and Jan. 26, 2016 (the Kentucky deadline to file for the presidential primary). That three-week gap means that if Grimes were to be defeated, her Republican successor would be sworn in in time to certify Paul for the presidential ballot.

While the libertarian wing of the Republican Party might be eager to see Rand Paul run in 2016, the path looks like a tortuous one. He could run in 2016, lose his Senate seat, and fail to clinch the Republican nomination, or he could easily coast to re-election in 2016, stay in government to settle “unfinished business,” and run again sometime in the future. He’s only 51, which makes him quite youthful given that Hillary, who the Democrats are eager to see run in 2016, will be close to 70.