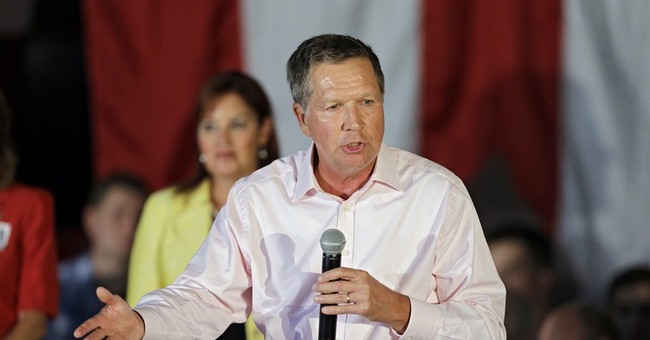 Back in June, Cosmopolitan’s feministsenior political writer Jill Filipovic lamented how purple Ohio has passed some of the most restrictive abortion laws in the country. One of those bills signed into law by Ohio Republican Gov. John Kasich banned abortions after 20 weeks in 2011; a bill so controversial that it’s supported by a majority of Americans pretty much across the board, including 60 percent of women.

Yet, here’s the best part:

Kasich is running for reelection this November, and abortion may be a key issue in his race against Democrat Edward FitzGerald. FitzGerald has warned that Ohio could become a state of "haves and have nots" when it comes to health care, and his running mate, Sharen Neuhardt, is an abortion-rights activist who served on the Board of Trustees of Planned Parenthood of Miami Valley from 1995 to 2002.

"John Kasich and a lot of the Republicans say that Ed picked me, basically, because I have ovaries," Neuhardt said at an event in January. "Ed FitzGerald picked me because I have a brain. Women in this state have brains, we have memories, and we vote. Memo to John Kasich: You're going to be really sorry that you messed with women come November."

In fact, it was massacre; Kasich easily defeated Fitzgerald 64/33.

According to exit polls, Kasich won:

The fact that Fitzgerald barely broke 40 percent in some these key demographics truly shows a pathetic campaign. To put more salt in the wound, when asked, “Is anyone in household a union member;” 21 percent of Ohio voters said yes, 79 percent said no. Of that 21 percent, Kasich won 53/42 over Fitzgerald.

Kasich won 86 of Ohio’s 88 counties–and got over 70 percent of the vote in 47 of them. In September, the Columbus Dispatch noted how Fitzgerald was trailing Kasich by 30 points in the polls. At the time, the Dispatch wrote if Kasich manages to beat Fitzgerald by that margin, “it would be the second-worst defeat for a major-party gubernatorial candidate in 188 years — topped only in 1994 when Gov. George V. Voinovich pulverized state Sen. Rob Burch of Dover by nearly 47 percentage points.”

Besides Wendy Davis' clown show, Ed Fitzgerald’s gubernatorial campaign was something of a disaster. In 2012, he was caught in the early morning hours in a car with a woman who wasn’t his wife; he didn’t have a proper driver’s license; with the latter development launching a three-month investigation by the inspector general to see if he violated county policy while serving as Cuyahoga County Executive. The report noted that Fitzgerald was responsible for “a breach of the public trust.” He also lost his home county to John Kasich.