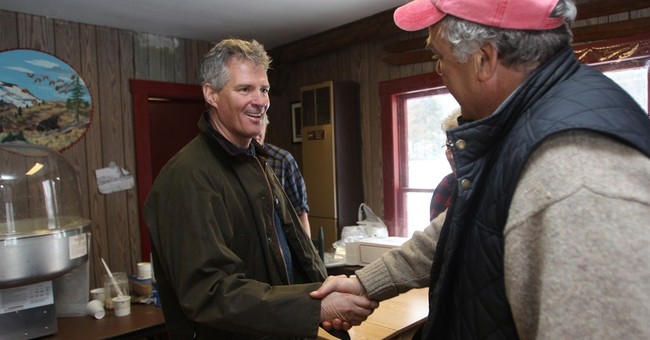 Yesterday, Dan reported that Scott Brown is within two points of incumbent Democratic Senator Jeanne Sheehan in the New Hampshire Senate race. He was trailing her by twelve points last month. Yet, Doherty noted that there is a lot of room for both sides to maneuver; there are a lot of undecideds to lock up. So, how did Mr. Brown gain traction with voters?

It seems immigration was the silver bullet (via Weekly Standard):

If the race is indeed tightening as the latest poll suggests, what could explain Shaheen's drop? Brown, despite having national name recognition and having represented New Hampshire's next-door neighbor in the Senate, may have been hurt early on by charges of carpetbaggery.

But Brown has also focused heavily on the issue of illegal immigration in television advertisements over the past few weeks, first highlighting security differences between the airport and the southern border, then hitting Shaheen more directly over her position on the Gang of 8 immigration bill, supported by President Obama. Shaheen, along with every other Democratic senator, voted for the Gang of 8 bill.

"Want to know why there's lawlessness on our border? Ask Senator Shaheen," said Brown in a 15-second TV ad that shows Shaheen and Obama standing together. "She voted against border security twice and for amnesty."

Brown's ads tying Shaheen to Obama's immigration policy may have been good politics. A recent national poll found Americans give Obama lower marks on immigration than his job generally, and 39 percent say they consider immigration one of their top three issues.

What’s interesting about this move is that you would think it would be a dud in liberal New England. After all, immigration is an issue, like health care, that gets conservatives animated. But, it seems even Granite voters have had enough with government inaction on immigration. Also, look the President’s approval numbers on the issue; it remains less than stellar. What other issues can Brown tie Obama to Shaheen?

Now, there were some tweaks concerning the respondents in the University of New Hampshire poll; they’re asking more self-identified Republicans. But, given that Republicans have the slight advantage this year, it’s not outlandish to say this could be the make-up of electorate come November (via Washington Post):

If you look back at UNH's April poll, you'll notice that Republicans backed Brown by about a 62-point margin. That's a big gap. But Shaheen had Democratic support at 74 points.

By August, Republicans had moved 14 points toward Brown (10 percent more for him; 4 percent less for her), while Democrats had only moved 10 points for Shaheen.

There was a tiny shift toward Shaheen among independents -- but since the pool of respondents was about the same, as we noted, that movement didn't matter much for the overall results.

Why the big move? One possibility noted by the pollster is that it is tied to Obama's flagging poll numbers. In the new survey, only 37 percent of respondents approve of the job Obama is doing. They heavily back Shaheen. But 59 percent disapprove of Obama -- and they heavily back Brown, though not as heavily.

And now we'll end with the standard, tedious truism that applies to most polling conducted well in advance of an election. What actually happens on Election Day depends on who comes out to vote. But if Republicans stay strong for Brown (partly thanks to ongoing frustration with Obama), and if they come out to vote, New Hampshire would be far closer than we might have expected.

Also, New Hampshire Republicans are splitting their support amongst a ton of candidates, besides Scott Brown. If Brown wins the primary on September 9, let’s see how the rest of the party rallies around him.

Although, there’s always someone to throw cold water on new developments to shock us back to reality. Sometimes it’s needed; other times it’s liberals just trying to keep their base calm, although FiveThirtyEight has also noted that Senate Democrats are in serious trouble. (via FiveThirtyEight):

Take the average, people. In the final week of the 2012 presidential campaign, there were multiple polls showing Republican Mitt Romney winning in Iowa. In October 2012, there was a poll showing Obama winning Arizona. Neither happened. Even good pollsters will occasionally have a result that is an outlier, and with enough polling, you’re guaranteed to have outliers.

It’s possible that Brown is slicing into Shaheen’s lead, but there hasn’t been any sign from any other pollster that Shaheen’s edge is down to 2 percentage points.

Yet, as many have pointed out online, the UNH poll was not part of this group. In late September, the Granite State Poll gave Obama a 15 percentage-point blowout win in New Hampshire. Next week, that lead was down to 6 points. Two weeks later, it was up to 9. Two weeks later, it was even. Two days later, the lead was back up, to 4 points. In the same span, the Huffington Post Pollster aggregate of polls never had Obama’s New Hampshire lead rising above 5 percentage points or dropping below 2 points.

Take what you want from this poll. It wouldn’t shock me if New Hampshire turns out to be a close one come Election Day.