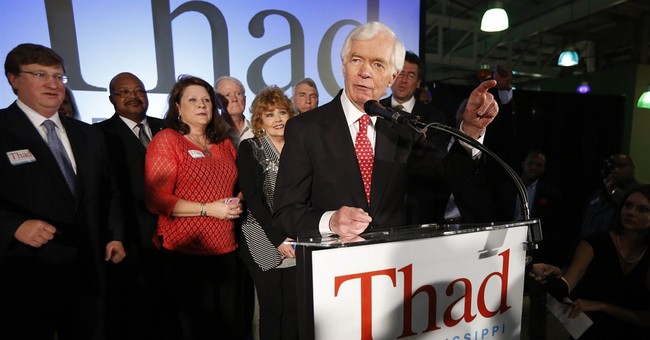 As my colleague Guy Benson has said at various panels and conferences, when you’re wrong, own it. After all, it’s the right thing to do. Last week, I wrote a post about how voter outreach and cultural ties helped Sen. Thad Cochran win in the Mississippi runoff against his challenger State Sen. Chris McDaniel.

As for the cultural ties, Mississippi voters still like their pork projects and the long-serving lawmakers who bring home that bacon. But, as for voter outreach, I jumped the gun. While evidence is still accumulating and being analyzed, there are some very questionable practices that have been alleged surrounding the get-out-the-vote effort on Cochran’s behalf that deserves some attention.

Investigative reporter Charles Johnson alleges that the Cochran camp bought the votes of black Mississippians. Matt Lewis at the Daily Caller wrote that:

Another interesting wrinkle is that the person making the allegation claims he received the walking around money to distribute to African-American voters but never got paid the money he was promised for his services (note: Always get paid up front!).

Of course, even if this pastor is telling the truth, the hard part will be proving that a). the people ordering the vote buying were actually from the Cochran campaign, and b). that the number of votes bought would account for the difference in the election.

Still, it doesn’t mean that Cochran’s GOTV operation shouldn’t be looked into over these reprehensible allegations.

Two Atlanta-based entities affiliated with Bickers, The Bickers Group and the Pirouette Company, were paid thousands of dollars to make robo-calls on Senator Cochran’s behalf by a super PAC that backed Cochran in his bid for reelection. Documents filed with the Federal Election Commission show that Mississippi Conservatives, the political-action committee run by former Mississippi governor Haley Barbour’s nephew Henry, paid the groups a total of $44,000 for get-out-the-vote “phone services.”

Mississippi Conservatives, the pro-Cochran PAC, paid the Pirouette Company $19,660 for robo-calls in the last week of the runoff, and Pirouette has its own colorful history.

Another Pirouette client in 2012 was the magistrate judge Melynee Leftridge, a candidate for state-court judge, and Bickers worked on her behalf. Days before Leftridge’s July primary, a voter filed an ethics complaint against the candidate, accusing her of an “apparent elaborate scheme” to funnel thousands of dollars to Pirouette. Bizarrely, at the time, according to a contemporaneous account in the Georgia Voice, Pirouette was a dance company that offered classes on “strip teasing and pole dancing” as well as “boot camps and personal fitness training.”

Bickers told the Voice that while the company worked with youth through dance and the arts, she encouraged Pirouette to “move toward expanding its services from community service to disadvantaged youth to include election consulting and field work as the election season ramped up.”

Pirouette wasn’t Bickers’s only source of income. The website of the Georgia secretary of state shows that she founded The Bickers Group in 2004. The principal office address is listed as a private home in Atlanta, and the website of the Georgia Government Transparency and Campaign Finance Commission shows that she has made thousands of dollars through the firm — including while she worked for Reed — for consulting, strategic work, field operations, and get-out-the-vote efforts for several Georgia political candidates.

And, apparently, for Thad Cochran. Federal Election Commission reports indicate that the Mississippi Conservatives PAC paid The Bickers Group $25,000 last week for “GOTV phone services” — even though, according to the Georgia secretary of state’s website, The Bickers Group dissolved in September 2012.

Yeah, it’s dirty politics at it worst. Now, the FEC is looking into the Mississippi Conservatives PAC for possible campaign finance violations.

To add to the post-runoff tension, just listen to this Cochran press call that devolved into chaos after an anonymous caller asked Austin Barbour, a senior adviser, “If black people were harvesting cotton, why is it ok to harvest their votes?”

The call ended soon afterwards, where angry members of the media demanded to know who asked the question and how rude it was to disrupt the call.

Right now, the McDaniels campaign claims to have found 3,300 questionable votes, so does he have a shot in court? Meredith Shiner at Yahoo! News wrote that candidates, like McDaniel, have difficulty keeping – or finding – allies that will continue to support them after such razor –thin losses.

Chief among the disadvantages of running an insurgent campaign is that when it comes to contesting close elections, tea party-backed candidates lack access to an expensive network of legal defenders who can be leaned on for help — and may even be turned away by top election law attorneys with loyalties that lie elsewhere.

“Most people will want to sit out,” said Republican lawyer Dan Backer, one of the few Beltway lawyers who represent conservative clients running against the party mainstream. “It's like in ‘The Sopranos,’ when Tony and Carmela are looking at getting a divorce and Tony calls all the divorce attorneys immediately to make sure she can't use them.”

McDaniel’s lack of resources and outside financial support is another significant obstacle to launching a formidable legal challenge. Before the competitive three-week runoff, McDaniel had a meager $60,000 in the bank to continue his statewide race.

In the case of McDaniel, this makes his road even tougher, as many people across Mississippi, particularly in legal and political circles, have some attachment to Cochran, who has served nearly 36 years in the Senate. Friends or friends of friends aren’t going to want to take up arms against the incumbent, especially in what has already been a bruising and deeply personal race.

But, let’s see how this vote-buying allegation pans out. It could be something, or it could be nothing. Regardless, it deserves some form of investigation to either confirm what conservatives have been saying all along about Cochran, or finally put a vicious rumor to bed.

UPDATE: Via Roll Call: McDaniel offered a $15,000 reward to those who find evidence of voter fraud.

State Sen. Chris McDaniel has offered 15 rewards of $1,000 each to any person who can “provide evidence leading to the arrest and conviction of anyone involved in voter fraud” in the Republican primary for Senate in Mississippi.

On Thursday, his campaign announced the “challenge” in the latest episode in a circus of a Senate race.