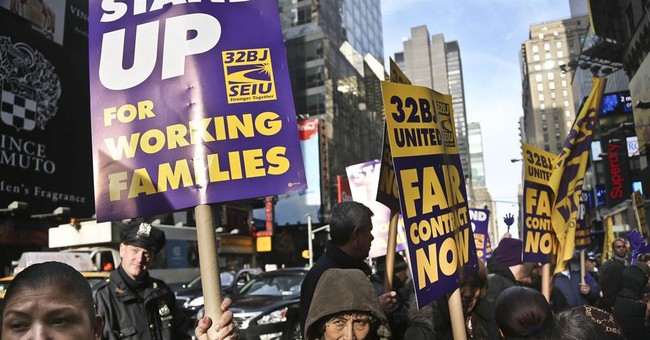 Today, the Supreme Court delivered a blow to public sector unions with their 5-4 decision that limited their power to collect dues.

The case involved a class-action lawsuit involving eight Illinois health workers, or personal assistants (PAs), who care for disabled persons in the comfort of their own homes. They’re also considered state workers, which means they must pay “agency fees” to the organized labor organizations that supposedly represent their interests with the Service Employees International Union (SEIU) or the American Federation of State, County and Municipal Employees (AFSCME).

An agency fee is the lifeblood of a labor union, as it covers the cost for collective bargaining. The eight workers have argued that this agreement violated their First Amendment rights.

No public sector union employee can be forced to support their affiliated union’s political agenda, but the Supreme Court also ruled in 1977 [Abood v. Detroit Board of Ed.] that states can “require workers to pay partial dues… to cover the union’s cost of negotiating their contracts and representing them in grievances. Illinois is among the states to require just that,” according to Politico.

In the decision for Harris V. Quinn, Justice Alito, writing for the majority, wrote that the First Amendment prohibited collection of agency fees from these health workers, who do not wish to join or support a union, but stopped short of gutting the right for unions to collect dues from workers who do not agree with public employee union activity by refusing to extend the Abood decision:

The First Amendment prohibits the collection of an agency fee from Rehabilitation Program PAs who do not want to join or support the union. Pp. 8–40.

The Abood Court also failed to appreciate the distinction between core union speech in the public sec- tor and core union speech in the private sector, as well as the conceptual difficulty in public-sector cases of distinguishing union expenditures for collective bargaining from those designed for political purposes. Nor does the Abood Court seem to have anticipated the administrative problems that would result in attempting to classify union expenditures as either chargeable or nonchargeable, see, e.g., Lehnert v. Ferris Faculty Assn., 500 U. S. 507, or the practical problems that would arise from the heavy burden facing objecting non- members wishing to challenge the union’s actions. Finally, the Abood Court’s critical “labor peace” analysis rests on the unsupported empirical assumption that exclusive representation in the public sector depends on the right to collect an agency fee from nonmembers. Pp. 8–20.

(b) Because of Abood’s questionable foundations, and because Illi- nois’ PAs are quite different from full-fledged public employees, this Court refuses to extend Abood to the situation here.

What justifies the agency fee in the Abood context is the fact that the State compels the union to promote and protect the interests of nonmembers in “negotiating and admin- istering a collective-bargaining agreement and representing the in- terests of employees in settling disputes and processing grievances.” Lehnert, supra, at 556. That rationale has little application here, where Illinois law requires that all PAs receive the same rate of pay and the union has no authority with respect to a PA’s grievances against a customer. Pp. 25–27

Now, what is the Abood decision?

D. Louis Abood was a teacher in Detroit who sued the city’s Board of Education on the grounds that paying dues to a union was a violation his First Amendment rights, as he did not agree with its political activities.The Court ruled:

Insofar as the service charges are used to finance expenditures by the Union for collective bargaining, contract administration, and grievance adjustment purposes, the agency shop clause is valid.

Although public employee unions' activities are political to the extent they attempt to influence governmental policymaking, the differences in the nature of collective bargaining between the public and private sectors do not mean that a public employee has a weightier First Amendment interest than a private employee in not being compelled to contribute to the costs of exclusive union representation. A public employee who believes that a union representing him is urging a course that is unwise as a matter of public policy is not barred from expressing his viewpoint, but, besides voting in accordance with his convictions, every public employee is largely free to express his views, in public or private, orally or in writing, and, with some exceptions not pertinent here, is free to participate in the full range of political and ideological activities open to other citizens. Pp. 227-232.

The Constitution requires that a union's expenditures for ideological causes not germane to its duties as a collective-bargaining representative be financed from charges, dues, or assessments paid by employees who do not object to advancing such causes and who are not coerced into doing so against their will by the threat of loss of governmental employment. Pp. 234-235.

Harris V. Quinn had union leaders quaking in their boots since this decision could’ve struck down laws in 26 other states requiring other public-sector employees to pay union dues.

Sahil Kapur at Talking Points Memo noted that some union members are saying this case could ensure unions’ “final destruction:”

Unions fear the implications extend far beyond the home health worker profession in Illinois. Agency fees in principle are important to public employee unions because they're required by law to bargain for all workers in a unionized setting. If agency fees for non-members are ruled to be a violation of free speech, unions fear they would lose funding, become less effective at bargaining for benefits and, in turn, lose members.

One labor official said such a result would bring about "the possible final destruction of the American labor movement." The official added, "It would cause the death not only of public sector unions and what's left of private sector unions, but also the Democratic Party," suggesting that the demise of unions would make Democrats more reliant on Wall Street money.

For now, union organizations can rest easy knowing that they're no longer threatened. But, more legal action is coming.