US Official: No Reason to Believe Returned Remains Aren't Americans 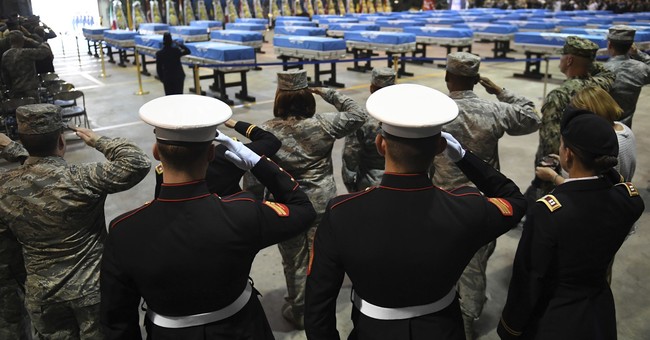 An initial "field forensic review" shows that the "remains are what North Korea said they were,” John Byrd, director of analysis for the U.S. Defense POW/MIA Accounting Agency (DPAA), told reporters in South Korea, according to Reuters.

While the identification process of the remains could take anywhere form days to decades, Byrd said "there is no reason to doubt that they do relate to Korean War losses."

There was only one identification “dog tag” the North Koreans included in the transfer, he said, but it’s unclear whether his remains were among the 55 caskets.

The North Koreans provided enough specifics about where each suspected body was found that U.S. officials have matched them to specific battles fought from 1950 to 1951, though not necessarily individuals, he said. (Reuters)

"They could go to Australia," Mattis added. "They have missing, France has missing, Americans have. There's a whole lot of us. So, this is an international effort to bring closure for those families."

Of the roughly 7,700 missing U.S. service members from the Korean War, approximately 5,300 are believed to be on North Korean soil.

The United States and North Korea conducted joint searches from 1996 until 2005, when Washington halted the operations, citing concerns about the safety of its personnel as Pyongyang stepped up its nuclear program.

More than 400 caskets of remains found in North Korea were returned to the United States between the 1990s and 2005, with the bodies of some 330 other Americans also accounted for, according to the DPAA. (Reuters)