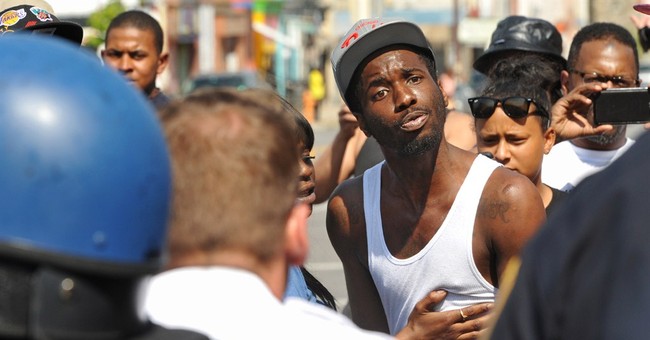 While there were certainly peaceful protesters in the wake of Freddie Gray’s death in police custody, the rioters who looted, burned, and generally wreaked havoc throughout Baltimore stole the limelight. And one couldn’t help but notice that the vast majority of individuals partaking in such behavior were young African-American men.

Sure, we all saw what happened when one mother caught her son participating in the riots, but where were the rest of the parents? Where were the fathers?

President Obama was right in his remarks on the violence in Baltimore to bring up this important issue, but it shouldn’t have just been a passing reference—it’s crucial to understanding the problem, which a new report helps shed some light on:

A new report released by the Family Research Council’s Marriage and Religion Research Institute (MARRI) says that only 16 percent of 15- to 17-year-old teens in Baltimore have been raised in an intact, married family.

The report, released Wednesday and compiled in light of the recent Baltimore riots, cites Census Bureau statistics showing that, in terms of family units, Baltimore is “one of the five least intact counties of America,” along with Cuyahoga, Ohio; the Bronx, N.Y.; the District of Columbia; and Shelby County, Tenn.

The family structure in Baltimore is crumbling and the rioting, plus the typical societal ills plaguing the city, is the manifestation of this problem.

Research shows that poverty, drug and alcohol abuse, crime, dropping out of school, emotional problems, and high dropout rates are all linked to fatherlessness. It’s an epidemic not just in Baltimore, of course, but nationwide, particularly in the African-American community.

Strong marriages and families are the antidote, of course, but it's no easy feat reinstilling the values that undergird these bedrocks of a healthy society, or reversing the welfare state that has fomented their destruction to begin with.

In a statement on the study, Bishop E. W. Jackson, Family Research Council Senior Fellow for Church Ministries and President of S.T.A.N.D, offered what he believes is the only solution going forward: “Only God -- not government -- can redeem the situation. Only prayer can move the heart of God. Only Pastors led by God can shepherd people out the darkness into the light of faith, family and responsibility. The church is the only institution with the credibility and spiritual power to transform the lives of the people and communities they serve,” he concluded.