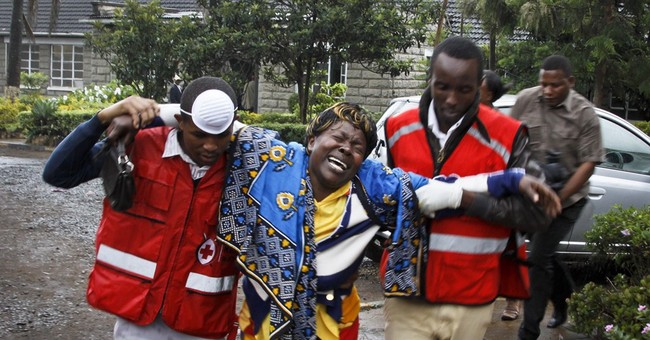 “We extend our deepest condolences to the families and loved ones of the at least 38 individuals killed yesterday,” the White House said in a statement condemning the recent terrorist attacks in Kenya by the Islamist militant group al-Shabaab. “The United States will continue to support Kenya and our regional partners in combating terrorism and violent extremism and protecting human rights.”

The statement is missing one glaring detail, however: Those killed were mainly Christians who were singled out and separated from their fellow Muslim workers.

As a reminder of what happened:

Islamic militant group al-Shabaab has killed 36 non-Muslim quarry workers, mainly Christians, after separating them from Muslims at a camp in Kenya. The attack, 10 miles from the town of Mandera, was reportedly carried out in retaliation for the Kenyan army's presence and anti-terror operations in Somalia.

"The militia separated the Muslims, then ordered the non-Muslims to lie down where they shot them on the head at close range," said Hassan Duba, an elder at a nearby village, according toReuters.

By the statement, one would have no idea religion played any role in the terrorist attack--both the victims' religion and the perpetrators'. And it's not as though this is an isolated attack. Al-Shabaab has made it clear they want to drive Christians ("crusaders") out “from Muslim lands” and a spokesman for the terrorist group said as much about the recent attack.

"We are uncompromising in our beliefs, relentless in our pursuit, ruthless against the disbelievers and we will do whatever necessary to defend our Muslim brethren suffering from Kenya's aggression," Ali Mohamud Rage said, reports The Christian Post.

Christians make up 82.5 percent of Kenya’s population while Muslims make up nearly 11 percent.

How much longer will the administration turn a blind eye to Christian persecution around the world?