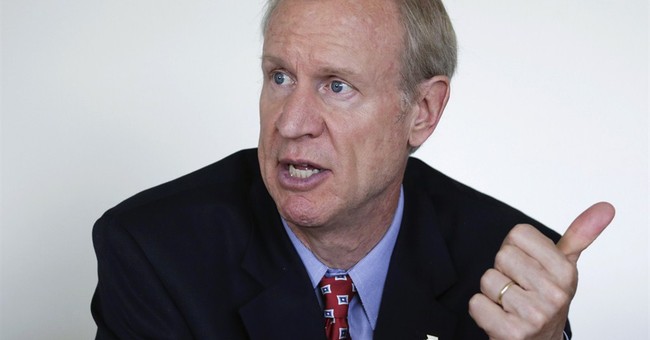 After months of attack ads, and their first televised debate last week, the Chicago Tribune has weighed in on Illinois’ toss-up gubernatorial race between Democratic Gov. Pat Quinn and Republican businessman Bruce Rauner.

In an op-ed published Friday evening, the editorial board began by listing the state’s current troubles:

“Some $200 billion in taxpayers' public debts. Including $100 billion in unfunded pension obligations. Even now, more billions in unpaid bills. Nation's weakest public retirement system. Nation's worst credit rating. And, five long years after the June 2009 end of the Great Recession, one of the worst job creation records in America.”

Quinn has had six years in office to turn things around, they argued, but none of it has been enough to bring economic greatness back to The Prairie State. Moreover, the governor’s treated as an “irrelevant bystander” in the state’s legislative chambers. “As a result, Illinois still overspends, overborrows and overpromises. The winners are union leaders and interest groups sworn to protect bigger state budgets than citizens can afford,” they write.

You can see where they’re going with this:

With that restoration of Illinois' competitiveness as our towering priority, the Tribune Editorial Board endorses businessman Bruce Rauner for governor. We urge voters to grant Rauner the power to revive Illinois.

What does Rauner, the Republican nominee, bring to the job?

From the get-go, Rauner has campaigned on the urgent need to shatter the self-serving political power structure in state government and promote a dramatically different agenda to get Illinois growing again. He knows that the answer isn't more tax increases. Unlike the ruling class in Springfield, he doesn't see employers as enemies useful only to be milked. He wants government to be of a size taxpayers can afford.

When we backed Rauner in the Republican primary, we said he isn't running to be elected Most Popular Pol. He said he would focus like a laser on rescuing Illinois from broad decline and narrow self-interests. He wouldn't have to please anyone but voters. And he'd have nothing to lose but a job he doesn't need.

We believe a Gov. Rauner would explore changes made by governors of other states with balanced budgets, solid retirement systems and lower unemployment rates. He's obviously competitive. He would strive to do what Quinn cannot: Make Illinois competitive again.

We also think a Gov. Rauner would restore state government to solvency — paying bills as they come due — not by raising taxes, as Quinn insists, but by making Illinois a place to grow jobs. Only by getting more people employed and paying taxes can this state help all the people it now cheats — those schoolchildren, university students and cloutless citizens who depend on state services.

The bottom line is that Illinois needs to change directions and they believe Rauner is the best man to lead the state down a better path.

And on the heels of the endorsement, the Rauner Camp is out with a new ad hitting Quinn for planning a massive tax hike after the eleciton.