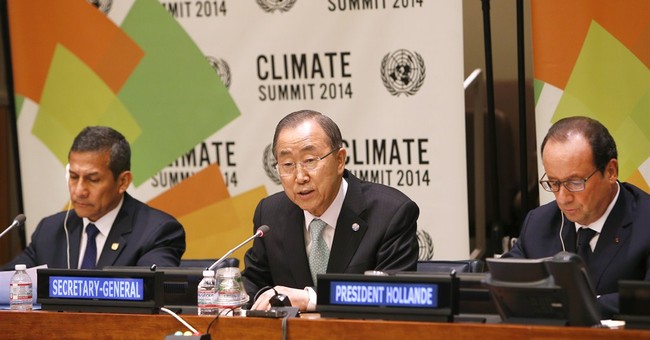 Environmentalists gathered in New York City on Tuesday for the UN Climate Summit 2014, which, according to its website, “will serve as a public platform for leaders at the highest level … to catalyze ambitious action on the ground to reduce emissions and strengthen climate resilience and mobilize political will for an ambitious global agreement by 2015 that limits the world to a less than 2-degree Celsius rise in global temperature.”

And to attend this important meeting, speakers from across the world flew a total of 1,036,537 miles. That’s awfully hypocritical considering environmentalists believe air travel to be the “most serious environmental sin,” don’t you think?

The UN Climate Summit 2014 is a glaring example of hypocrisy. Just the speakersalone, not the attendees or notable guests for the summit, traveled a grand total of 1,036,537 miles from locations as distant as China, India and Peru. That's enough miles to circle the equator41.6 times.

According to the UN itself, in the United Nations Framework Convention on Climate Change, "more than95 percentof our total carbon footprint resulted from air travel."

Filmmaker and journalist Phelim McAleer pointed this very hypocrisy out at the UN Climate Change Conference in 2009.