US Official: ISIL Is 'No Longer a Terrorist Organization--It's a Full-Blown Army' 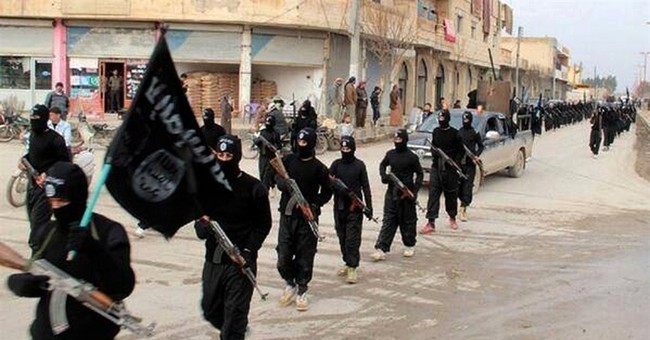 By now, we all know how wrong President Obama was when he repeatedly said on the campaign trail in 2012 that al Qaeda is on the path to defeat. Indeed, it seems like we’ve got a much bigger problem on our hands. According to top U.S. officials, the Islamic State of Iraq and the Levant is “worse than al Qaeda.”

Via The Hill (emphasis mine):

"It is al Qaeda in its doctrine, ambition and increasingly, in its threat to U.S. interests," Brett McGurk, deputy assistant secretary of state, told lawmakers at a House Foreign Affairs Committee hearing. "In fact, it is worse than al Qaeda."

McGurk said the group, which splintered off from its parent, al Qaeda in Iraq, had strengthened its capabilities and was “no longer a terrorist organization. It is a full-blown army.”
Elissa Slotkin, acting principal deputy undersecretary of Defense for policy, added that the group has threatened: "We're coming for you, Barack Obama."

ISIS has captured huge parts of both countries and threatened to move on Baghdad last month, leading President Obama to authorize deploying nearly 750 troops to Iraq.

Over the weekend, Attorney General Eric Holder said the threat of ISIS fighters infiltrating into the U.S. was "more frightening than anything I think I've seen as attorney general."

Former Defense Secretary of Homeland Security Tom Ridge told The Hill Wednesday that the threat from ISIS has been "blinking red a long time."

"It's been blinking red but now it's flashing more frequently and is a lot brighter," he said.

"They've got a lot of fighters who are from European countries that are visa waiver countries, which means all they have to do is shave their beards and look like normal responsible civilians and walk into the United States of America without a visa."

"So it's a real challenge for our intelligence community to identify them and get their names on a watch list," he said.

Publicly, the administration says it has no plans for a U.S. military intervention to stop the extremist group, but Iraq’s request for U.S. airstrikes is “still under active consideration.”

“There is no exclusively military solution to the threats posed by ISIL in Iraq,” the Pentagon’s Elissa Slotkin said. “DoD remains postured should the president decide to use military force as part of a broader strategy. Our immediate goals … are to protect our people and property in Iraq; gain a better understanding of how we might best train, advise and support the Iraqi Security Forces [ISF] capabilities should we decide to support the ISF going forward … and expand our understanding — particularly via intelligence — of ISIL.”