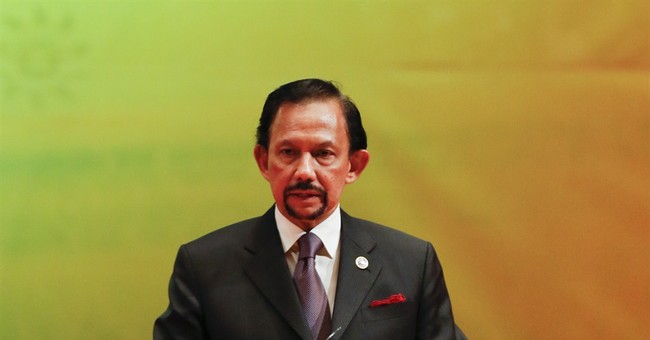 So much for moving forward. The small country of Brunei has become the first East Asian nation to adopt sharia law. Under the harsh Islamic penal code, certain crimes will be punishable by flogging, dismemberment, and death by stoning, CNN reports.

During a ceremony Wednesday morning, the Sultan of Brunei, Hassanal Bolkiah, announced the commencement of the first phase of the sharia-based penal code, according to the government's official website. […]

Most parts of the new Islamic code will apply to both Muslims and non-Muslims, affecting people from the Christian and Buddhist communities. Around 70 percent of people in Brunei are Malay Muslims, while the remainder of the population are of Chinese or other ethnic descent.

The Sultan, who is also the Prime Minister, first announced the law in October 2013. As per its provisions, sexual offenses such as rape, adultery and sodomy will be considered punishable acts for Muslims. Consensual sex between homosexuals will also be criminalized, with death by stoning the prescribed punishment.

In announcing the implementation of sharia law, the government website quoted the Sultan as saying that his government "does not expect other people to accept and agree with it, but that it would suffice if they just respect the nation in the same way that it also respects them."

The international community has, for obvious reasons, strongly condemned the move, which Amnesty International’s Rupert Abbot said will “take the country back to the dark ages.”

“Brunei Darussalam’s new Penal Code legalizes cruel and inhuman punishments. It makes a mockery of the country’s international human rights commitments and must be revoked immediately,” Abbot said in a statement.

The United Nations also expressed their concern over the country’s implementation of sharia law last month. "Under international law, stoning people to death constitutes torture or other cruel, inhuman or degrading treatment or punishment and is thus clearly prohibited," said Rupert Colville, spokesperson for the U.N. High Commissioner for Human Rights.

The criminal law will be implemented in three phases. Phase one began on May 1, with the harsher forms of punishment to be brought in gradually over a three-year period.