Rep. Diane Black Discusses the Past and Future of the Pro-life Movement as Her Time in the House Ends 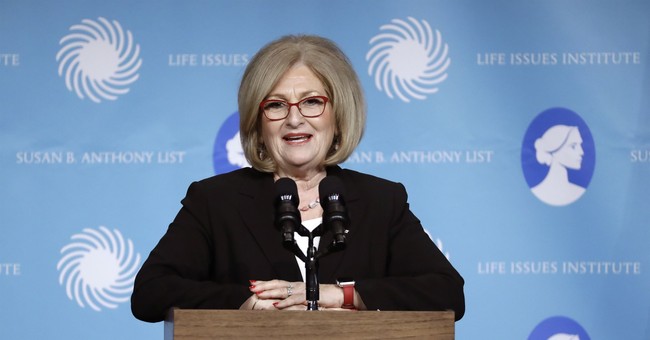 Rep. Diane Black (R-TN) is bidding farewell to the House of Representatives at the end of this term. She is regarded as a champion for pro-life issues and is a trail blazer in many ways. She is the first in her family to graduate college, a nurse who got into politics to fix Tennessee’s healthcare system, and the first woman to chair the House Budget Committee.

She’s never bought into the narrative that abortion is necessary for a woman to succeed and fighting to end abortion has been a priority for her throughout her time in Congress.

In an interview with Townhall Thursday, Black explained that her opposition to abortion stemmed from both her experience as a nurse and her Christian worldview.

“I graduated from nursing school in 1971 and of course going through nursing school you just have such great value for life period and especially for new life,” she said.

“I couldn't imagine anybody not wanting a baby or even if they had a baby not allowing the baby to live and be adopted,” she added, “being a nurse and actually being there when life came into the world I think informed who I am today.”

Among her pro-life legislative efforts, she is particularly proud of her work on the Conscience Protection Act, which would forbid discrimination against a health care provider “based on the provider's refusal to be involved in, or provide coverage for, abortion.”

As a nurse, she identified with other nurses who were forced into situations where they had to either violate their deeply-held religious belief that abortion ends a human life or lose their job.

“I certainly did have great respect for people who had tried to exercise their right and have been fired from their job or were being harassed on their job or felt like they couldn't go into work and be who they were,” she said.

“I think if we could ever get to that point where we could acknowledge that taxpayer dollars should not be used for abortion that would be to me a real accomplishment," she said.

Despite the setbacks on this front, Black celebrated the strides made to defund the nation’s largest abortion provider at the state level as well as President Trump signing the Title X Congressional Review Act into law. That legislation solidified the right of states to defund Planned Parenthood, overturning the Obama administration’s December 2016 decision to force states to provide grants to facilities performing abortions or abortion referrals.

“He is a pro-life president,” she said of Trump, “and I’m hoping that we will continue to be able to do things with the president and the vice president being favorable on life.”

While Black firmly believes that human life begins at conception, she’s also fighting for more middle ground in the debate. She argued that in the case of late-term abortions there shouldn’t even be a debate.

“There is no discussion about after five months,” she said, “There should be no abortions…we know babies are capable of pain at that point.”

Black championed the Pain Capable Unborn Child Protection Act which passed the House and would ban abortions after 20 weeks – the point at which science suggests unborn children feel pain.

She mentioned meeting Micah Pickering, a boy who was born prematurely at 22 weeks gestational age (20 weeks).

“He was so tiny there were no diapers to fit him, they had to take diapers and cut them up and form and shape them to a baby and then use tape to keep them on him,” she said.

During his visit to Capitol Hill last year at the age of five, she said, “he was just as bright as a bulb he was running around playing with his cars so don’t tell me at five months when we have a baby that was born at twenty weeks and is just normal that that’s not a real life.”

Black applauded the upcoming March for Life’s theme that “pro-life is pro-science.” She argues that, having seen the Roe v. Wade decision and the scientific developments that followed, the humanity of the unborn child has become more and more evident.

“When Roe v. Wade was considered it was thought that when you got pregnant that was a blob of tissue,” she said.

“I had three children and never had an ultrasound,” she added, “now everybody gets ultrasounds."

Despite the advancements in such technology, Black noted that “pro-abortion people try to continue to use that lie when they say that is not a baby. Well, science says different and we need to make sure everybody understands science.”

She acknowledged that in the immediate future, with a Democrat-controlled House of Representatives, advancement on pro-life issues would be more difficult.

“I think it is going to be harder,” she said. “I’m not as optimistic that we’re going to have opportunities to do the kinds of things we were able to do.”

Regarding the legislation she accomplished on the House side she noted that “even if you weren’t able to get them signed into law because the Senate didn’t pass them, which was discouraging to me, at least you kept the topic alive and the discussion alive so that the American public could be made aware of the science, aware of the laws.”

However, Black hoped that on issues like protecting conscience rights “that there won’t be this feet in the sand to say no just because we’re Democrat or we’re Republican or we’re pro-choice or we’re pro-abortion that I’m not going to vote on something that’s common sense.”

Black also lamented the dwindling number of pro-life Democrats. Following the midterm elections, there are only two Democrats in the House endorsed by Democrats for Life: Rep. Collin Peterson (MN) and Rep. Dan Lipinski (IL).

“It sometimes makes me scratch my head,” she said and then pointed out that, for some, their views on abortion go against what their own faith traditions teach.

“I am going to use Nancy Pelosi as an example,” she said, “She’s a Catholic and we know what the Catholic Church believes and yet she does not espouse to what her own religion believes and that is disturbing to me.”

“I think that it is really disturbing to me that you would not profess what is really an essential element of your particular faith,” she emphasized.

“It’s a lot of money in Planned Parenthood and a lot of falsehoods that are put out there and certainly a lot of things that are done behind the scenes that people don’t know about,” she said regarding the Democrats’ increasingly extreme position on abortion.

“I have friends who are pro-choice but they don’t believe that a baby should have their life taken away from them after the first 6-8 weeks,” Black said.

The more moderate position of some of Black’s friends on the issue is likely reflective of the position of many Americans. A recent Gallup poll found that over half of Americans favor some restrictions on abortion.

Black was also frustrated by the manner in which abortion proponents disregard the humanity of the unborn child despite their compassion for the lives of baby animals.

“I really don’t get their way of thinking,” she said, “If you’ve had your own child, if you’ve seen your own grandchild if you’re an animal lover you should love a baby just as much as you would any animal and if you are in a faith that is a deeply-held faith that says life begins at conception, I don’t get it so I don’t understand why the Democrat women are so pro-abortion.”

Part of Black’s opposition to abortion comes from her recognition of the value of life that defies what society deems “normal.” This includes children with Down syndrome she’s met over the years and her own colleague Rep. Jaime Herrera Beutler’s (R-WA) miracle daughter Abigail.

“I’ve been with an organization for years now Art Without Borders,” she said, “and we had three of the children with Down syndrome to our house for dinner last week and they were just remarkable. One young girl she’s twenty years old and she’s highly functioning, she could speak Arabic but she could speak English.”

“What’s normal?” she asked. “I know people that are supposed to be normal that aren’t normal to me so let’s not judge what normal is.”

“Look at Jaime Herrara Beutler when they wanted to abort that little gal,” she said. “If you’re around her for two minutes you realize how special she is.”

Abigail Beutler was diagnosed in the womb with the rare genetic condition, Potter’s Syndrome, a fatal diagnosis meaning that she had no kidneys. Rep. Beutler rejected the advice of doctors to get an abortion and instead received an experimental treatment of saline injections during her pregnancy. Abigail is the first baby to survive birth without kidneys and her story has helped other babies who survived due to that same treatment.

Overall, Black remains hopeful for a shift in public opinion on the abortion issue.

“I continue to say that science will one day change the mind of people,” she emphasized, “we have 3-D ultrasounds, there is a window into the womb that there wasn’t many years ago with people that were my age.”

She said that in addition to the advancement of science on the topic, much of the stigma that accompanied the pregnancy of an unmarried woman is non-existent in society today.

“People are not at all disturbed when a young woman is not married and has a baby these days so there’s not a stigma like it was many years ago with my generation,” she said, “I think all of that together the science, the non-stigma, and the value for life I think is all going to, at some point in time, bring us back to where we should have been some 50 years ago.”

Black is glad that she was able to fight on this issue during her time in the House.

“I have had an incredible opportunity to make a small mark in history for life and that is really a privilege,” she concluded.