Elizabeth Warren Says There Should Be a Law to Protect Mueller, Dodges Question of Impeachment 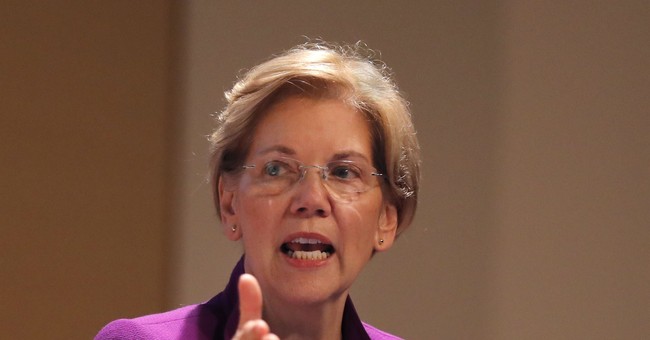 Sen. Elizabeth Warren (D-MA) told CNN Wednesday that she believes Congress should respond by protecting special counsel Robert Mueller after former Trump campaign advisor Paul Manafort was convicted Tuesday on eight counts and Michael Cohen pleaded guilty on tax fraud charges. Warren made clear that she did not believe it was the time to raise the impeachment issue despite repeated attempts by CNN’s John Berman to get her to call for it.

"I think that what Congress needs to do right now, is we need to make sure that special prosecutor Mueller is fully protected from being fired by Donald Trump," Warren said in response to a question about whether Cohen’s testimony was grounds for impeachment.

"Donald Trump has made clear there’s only one thing he cares about, and that’s protecting his own skin," she continued.

“This is Michael Cohen saying the president directed me to break a campaign finance law,” Berman pressed, asking again if that alone was an impeachable offense.

Warren replied by calling for a thorough investigation to be completed.

"The question you're asking is about the president of the United States, and what I'm saying is we have an ongoing investigation that is much more sweeping, that is much broader than simply what happened in New York court yesterday," she said. “If you really want to look at what Donald Trump has done and what kind of responsibility he should have, let’s get that investigation finished as well.”

Berman followed up by wondering why Warren was “nervous” to call for impeachment hearings.

“What I’m hearing from you is a reluctance to say the ‘i’ word directly,” he said. “Why would you be nervous to say hey, I think the House Judiciary Committee should hold hearings and look at this as an impeachable offense?”

She again emphasized that it is essential to let Mueller’s investigation finish before any such call for impeachment.

“I’m not nervous,” she said, “I just want to be effective and the way that any of us are effective is to say let’s get all of the evidence, all of the pieces out there. Protect Robert Mueller, let him finish his investigation, let him make a full and fair report to the American people and when we’ve got that then we can make a decision on what the appropriate next step is.”

High-ranking Democrats have shied away from impeachment talk amid Mueller’s investigation into Russian interference in the 2016 election. House Minority Leader Nancy Pelosi (D-CA) called such talk a “gift to Republicans,” earlier this year.

"You can't impeach on the basis of minor derelictions or even crimes," he said. "You need a high crime and misdemeanor, and you know every campaign has violated some technical election law."

"Yeah, I think there are going to be some Democrats...who will run on 'give us the House, we'll impeach the president,'" he added. "I think impeachment will be an issue, but I think the law on impeachment, at least according to my research, is fairly clear."

He told the court that he violated campaign finance laws in the arrangement of payments to Stormy Daniels and Karen McDougal, saying he’d violated federal law "in coordination with and at the direction of a federal candidate for office," in an apparent reference to President Trump.