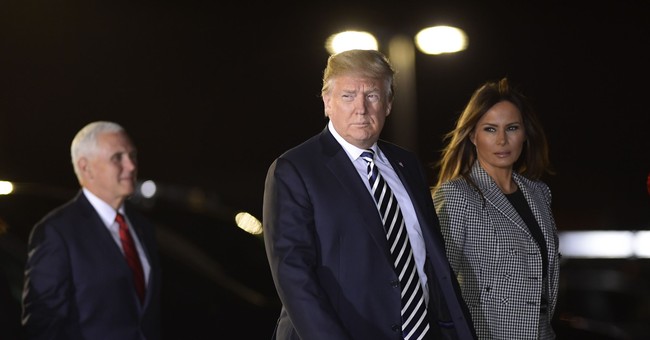 President Trump tweeted Wednesday that the media has been unfair in their coverage of his wife, First Lady Melania Trump, following her surgery. He condemned conspiracy theories floating around, including that Melania was near death or had gotten a facelift.

The Fake News Media has been so unfair, and vicious, to my wife and our great First Lady, Melania. During her recovery from surgery they reported everything from near death, to facelift, to left the W.H. (and me) for N.Y. or Virginia, to abuse. All Fake, she is doing really well!

He also pointed out that reporters had said they had seen Melania in the White House last week, but the media ignored those sightings.

...Four reporters spotted Melania in the White House last week walking merrily along to a meeting. They never reported the sighting because it would hurt the sick narrative that she was living in a different part of the world, was really ill, or whatever. Fake News is really bad!

Rumors flew in the media regarding Melania’s absence from public events despite her recent major surgery. A CNN segment even claimed she was “missing.”

This coverage was in spite of reporters, including a CNBC correspondent, who saw her at the White House.

The First Lady tweeted her own assurance that she was doing well last week.

Despite his segment on the matter, CNN's Brian Stelter tweeted that the president was "conflating random Twitter commentators with 'the media.'"

Trump is conflating random Twitter commenters with "the media" here. A common tactic of bad faith critics. But disappointing to see POTUS do it. pic.twitter.com/7tWObMmUdD

Stelter's tweet prompted some on Twitter to point out specific instances in which media figures did suggest the things Trump tweeted.

I have tweets here from Rolling Stone and Atlantic writers suggesting spousal abuse. And that’s to say nothing of the winking “Say, where in the world is Melania?” news reports.

I wish that I didn’t suspect that the prolonged, poorly explained public absence of Melania Trump could be about concealing abuse. I wish that it was a ludicrous prospect. I wish that the @POTUS wasn’t a man with a history of abusing women, including those to whom he is married.