Trump Tweets on ABC's Apology to Valerie Jarrett: They Never Called to Apologize for Insulting Me 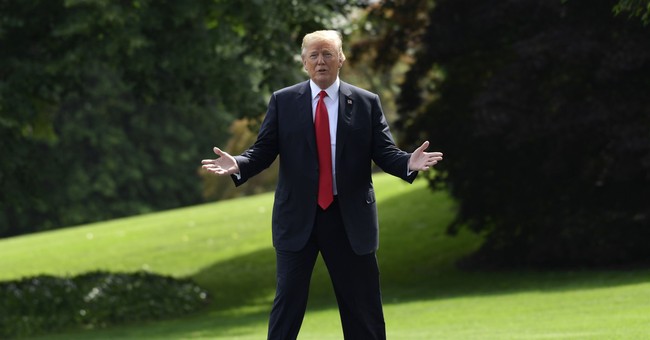 The president said that Iger “never called President Donald J. Trump to apologize for the HORRIBLE statements made and said about me on ABC.”

Bob Iger of ABC called Valerie Jarrett to let her know that “ABC does not tolerate comments like those” made by Roseanne Barr. Gee, he never called President Donald J. Trump to apologize for the HORRIBLE statements made and said about me on ABC. Maybe I just didn’t get the call?

Disney owns ABC and Barr’s show ‘Roseanne’ was cancelled Tuesday in light of her tweet. Iger called Jarrett ahead of ABC’s announcement to let her know.

“He wanted me to know before he made it public that he was canceling the show,” Jarrett said Tuesday. She called the incident a “teaching moment.”

Barr tweeted about Jarett Tuesday: "Muslim brotherhood & planet of the apes had a baby=vj." She deleted the tweet and initially apologized Tuesday but then retweeted supporters defending the tweet Tuesday evening and Wednesday morning.

Many in the media pointed out that White House Press Secretary Sarah Huckabee Sanders had told reporters yesterday that President Trump was focused on other issues when she was asked about the 'Roseanne' show's cancellation.

When Sarah Sanders was asked about ABC/Roseanne last night: "Look, as you know, the president has been extremely focused, as I just walked through the things going on with the upcoming summit. And the president is focused on North Korea. He’s focused on trade deals..." https://t.co/n6wnzFAiPs