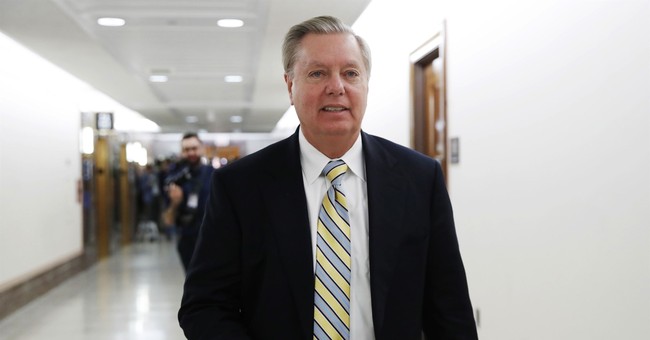 “I talked to him yesterday, and the President feels like they’re playing him, so he brought it to an end, and we’ll see if we can re-engage,” Graham said on Hewitt’s radio show. “But everybody is missing the big picture here.”

Graham explained why he believes North Korea is a pressing problem that the president will address soon.

He said that he told the president that “North Korea is your most acute problem. Iran’s your long-term problem. And I said you’ve got two choices – containment, which is give them a nuke and a missile and tell them if they ever use it, we’ll blow you off the map. I don’t like that, because they sell everything they build.”

He said in a meeting with Trump and former National Security Advisor H.R. McMaster that the President decided to end North Korea’s nuclear program.

“To me, it’s denial, denying them the capability of having a weapon to hit America with a missile with a nuclear weapon on top,” Graham emphasized. “We’re not going to give them that capability. Tell them to get out of the nuclear business and be willing to go to war. And he turned to McMaster, and he says what do you think? And he says I think we need to get them to give up their nukes for the good of our security and the world at large.”

“As president of the United States, he’s made a decision to end the North Korean nuclear program,” Graham said. “He wants to do it peacefully, if possible, and he’s going to do it in his first term, I believe.”

Graham emphasized that Trump has two options to accomplish this and that obviously a peaceful agreement is the preferred option.

“There’s two ways on the how side – through diplomatic negotiations with China helping us to give up their program,” he said. “We sign a peace treaty and end the cold war. They get a better economy, we’re not invading North Korea, we’re giving them the security they need, and they give up their nukes and they’re in the same boat as Japan and South Korea. The other way is if they insist on continuing to have a nuclear capability to threaten America, that we use military action which would be the total destruction of the regime.”