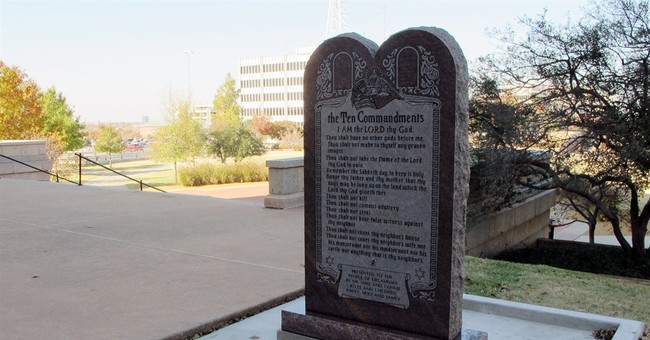 A notable act of public vandalism occurred in Oklahoma today, as a crazed Satanist drove his car to a federal building and crashed it into a controversial monument of the Ten Commandments. As the Associated Press reports:

[A] man was detained after he showed up at a federal building in Oklahoma City Friday morning, rambling and making derogatory statements about the president, and admitted destroying the monument, said David Allison, an agent with the U.S. Secret Service in Oklahoma City.

"He claimed he got out of his car, urinated on the monument, and then ran over it and destroyed it," Allison said. "He said Satan told him to do it, and that he was a Satanist."

The man was turned over to the Oklahoma Highway Patrol for questioning, Allison said. A spokesman for the patrol didn't immediately return a phone call seeking information about the man.

The monument in question has been a topic of controversy, as the American Civil Liberties Union has sued to remove it, claiming that its existence is a violation of the separation of church and state.

The ACLU issued a statement saying that it was "outraged" over the vandalism.