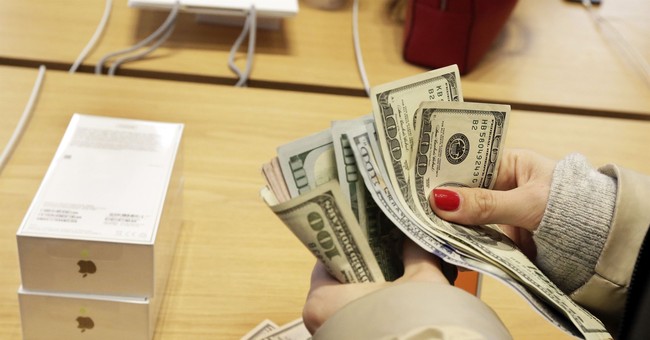 On Sunday, President Trump tweeted on the imposing of new tariffs on international trade, and even asserted that revenue generated from the tariffs would help to pay off national deficit.

Tariffs are working big time. Every country on earth wants to take wealth out of the U.S., always to our detriment. I say, as they come,Tax them. If they don’t want to be taxed, let them make or build the product in the U.S. In either event, it means jobs and great wealth.....

..Because of Tariffs we will be able to start paying down large amounts of the $21 Trillion in debt that has been accumulated, much by the Obama Administration, while at the same time reducing taxes for our people. At minimum, we will make much better Trade Deals for our country!

In Gregory May’s new book, released on Tuesday, Jefferson's Treasure: How Albert Gallatin Saved the New Nation from Debt, May asserted that Alexander Hamilton pulled the nation into debt by instituting similar tariffs and fiscal policies during his six-year tenure from 1789 to 1795 as Secretary of the Treasury.

“Hamilton was convinced that the government could finance itself on import duties. There was no income tax at the time.  An income tax, was not seen as regressive burden on poor as it is today. Most were people farmers...only well to do were buying imported goods,” May told Townhall, when asked if other similarities can be seen between President Trump and Secretary Hamilton.

By this logic it would be easy to try and draw a comparison between the import duties of the day and what is now the movement calling for the taxing of the rich and the 1%. However, May says that it is not comparable to taxing the rich and the 1%, "you can’t draw such easy analogies because of difference in the times."

Assuming President Trump follows through on his threat to impose tariffs, how successful do you see this strategy being, both generally and in relation to pulling the US out of debt?

“I would think the amount of money raised by the tariff revenue would be minimal,” responded May. What May has put forth here is exactly what was reported in the Washington Post.

“In terms of Trump’s claim that money raised from the tariffs will help pay down the debt, the United States has a debt of over $21 trillion. The president has imposed tariffs on $85 billion worth of foreign goods so far, meaning that, at most, his tariffs would raise about $21 billion, a minuscule percentage (0.1 percent) of the debt” reports the Post.

Albert Gallatin was Secretary of the Treasury following Hamilton from 1801 to 1814 under Presidents Jefferson and Madison. As put forth in the book, Gallatin was in favor of loans rather than tariffs and pulled the nation out of debt.

If you could advise President Trump concerning his fiscal policies, would you advise him to adopt policies similar to Gattalin?

“As I stated earlier, our federal government is not our forefathers' government; it is extensively more complicated and hugely intertwined in the economy,’ May said.

However, May asserted that there are some basic common sense principles which could be applied by today’s politicians. "First, don’t reduce deficit by continuing to spend more than we take in. Secondly, if don’t tax we don’t tax people, how do you if they truly support it? They will always take something for nothing.  If the tax system doesn’t support government activities, there is a disconnect.  All governments need to borrow especially in times of crisis," asserted May.

Do you believe that President Trump will plunge the country into debt as Hamilton did?

"Hamilton was not pro-tariff, he saw tariffs as a source of revenue; the debt was  run up during the war, it was seen as the price of liberty. How to go about repaying was the question which divided Hamilton and Gallatin" May responded.

“The utility of trying to use history in the wrong way, prevents us from understanding, if we don’t understand it, we can’t use it.I don’t think it’s true that history repeats itself, sometimes we see patterns of human behavior or repeated, moral, economic or political problems, said May.

Very often it is said that history repeats itself, or that we can draw lessons from history.

"Don’t draw analogies, look critically at how people dealt with similar that have occurred in history and try to glean knowledge from how they dealt with these problems that can be applied to today’s problems,” May urged.