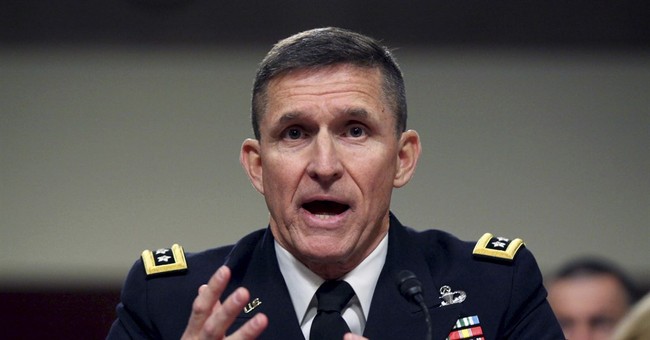 "He was also very concerned in light of he sensitive subjects dealt with by that position of national security advisor like China, North Korea and the Middle East, that the President must have complete and unwavering trust for the person in that position," Spicer continued. "The evolving and eroding level of trust as a result of this situation in a series of other questionable instances is what led the president to ask for General Flynn's resignation."


When pressed on whether the White House was confident Flynn hadn't misled the President, Vice President and others on matters outside of Flynn's phone calls with the Russian ambassador, Spicer argued national security  briefings are given to the President by a number of people.

Spicer: If you look at the team, it's not one person in isolation, it's several. You've got General Kelly on the Homeland Security front, you've got Mattis on the DOD front, he's got an entire national security staff apparatus that briefs him, Director Pompeo at the CIA and others from the DNI's office that come brief him on a whole host of issues. It's not a single position [briefing the president].

Pavlich: So this was an isolated incident of Flynn giving bad information?

Spicer: Regardess of whether it is or isn't a single situation, it's not as though there's one person briefing him. The President synthesizes a lot of information both written and stuff that is briefed to him and ultimately it is he who makes a decision based a lot on what he already knows, what he is presented with, so the president gets information from a lot of people.

Spicer also said there was "exhaustive and extensive questioning of General Flynn" to find the truth about his phone calls with the Russian ambassador.