Report: Bergdahl Definitely Deserted To Turn Himself Over to The Taliban, Other U.S. Enemies 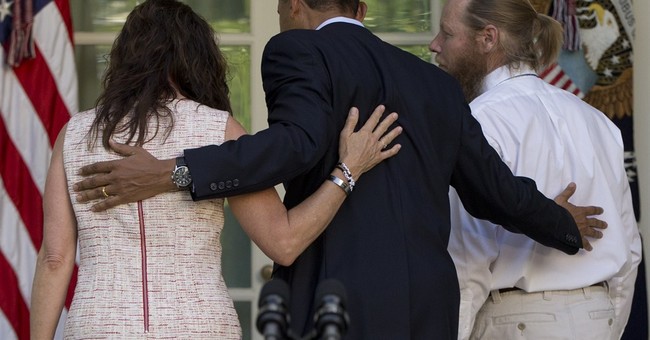 Army Sgt. Bowe Bergdahl, who was traded in a prisoner swap by the Obama administration for five top Taliban commanders last summer, has been charged with desertion and misbehaving in front to the enemy under the Uniform Code of Military Justice. He faces life in prison if he is convicted.

Bergdahl's legal defense team will argue in military court that Bergdahl didn't desert, but was trying to get to another base to report wrongdoing inside his Army unit.  Up until this point, the Obama administration has defended the decision to get Bergdahl back in exchange for terrorists, even going so far as saying he served with "honor and distinction."

But a report from the Naval Criminal Investigative Service shows Bergdahl not only deserted his unit, but deliberately tried to seek out the Taliban and other enemies of the United States. It should be noted that many of Bergdahl's platoon members have said this from day one, but were smeared by the Obama administration as uncredible and as liars for doing so.

A 2009 NCIS investigation into Sgt. Bowe Bergdahl’s activities while in Afghanistan reveal that there is clear evidence Bergdahl was “going over to the other side with a deliberate plan,” Lt. Col. Anthony Shaffer said on Fox News' "The O'Reilly Factor" Monday night.

“He had Afghan contacts and he was actually trying to offer himself up with the Taliban. Both are very severe,” Shaffer added.

Shaffer said that the NCIS investigation, which included interviews with squad mates as well as Afghans working outside the wire, reportedly resulted in Bergdahl being charged with misbehavior toward the enemy.

Lt. Col. Shaffer also noted during the interview above that President Obama had to have known about Bergdahl's desertion through the NCIS before making the decision to negotiate his release.

A preliminary Article 32 hearing has been scheduled for Bergdahl's case and will be held at Ft. Sam Houston, Texas. When the hearing will take place will be announced at a later date.