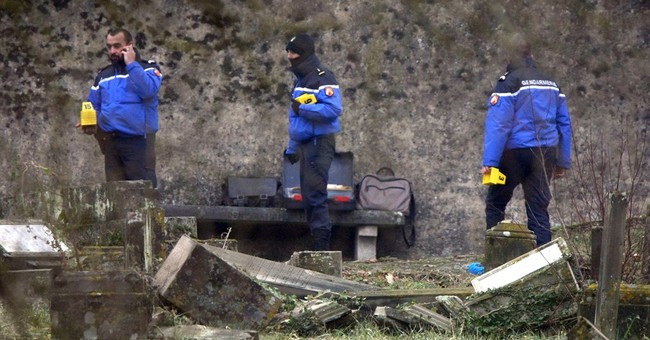 Anti-Semitism is on the rise in Europe and there is plenty of evidence to prove it. In January, a Kosher deli in Paris was attacked by an Islamic terrorist shortly after the rampage carried out at Charlie Hebdo. Over the weekend in Denmark, a synagogue was attacked and in France, hundreds of graves were desecrated and destroyed. More from Yahoo News about the details:

France's interior minister said Sunday several hundred tombs had been defaced at a Jewish cemetery in the northeast of the country, in what he called "a despicable act".

Police had cordoned off the isolated cemetery late Sunday as crime scene investigators were sent from Strasbourg to the site, an AFP correspondent reported.

"Around 300 tombs have been defaced," said a source close to the investigation, adding that there had been no reports of anything written on the tombstones.

"It's an image of desolation," president of the Alsace region Philippe Richert told AFP, describing how Jewish steles, stone or wooden slabs often used for commemorative purposes, were knocked down and even some slabs at the gravesites had been lifted.

"One doesn't knock over heavy steles like that dating from the 19th century very easily. it was a deliberate act of destruction," he said.

French President Francois Hollande called the desecration an "odious and barbaric act" while Prime Minister Manuel Valls, writing on Twitter, described it as "anti-Semitic and ignoble".

Officials at the State Department have been reportedly monitoring the rise of anti-Semitism in Europe since last year. Israeli Prime Minister Benjamin Netanyahu has called on Jews living under threat in Europe to move to Israel.