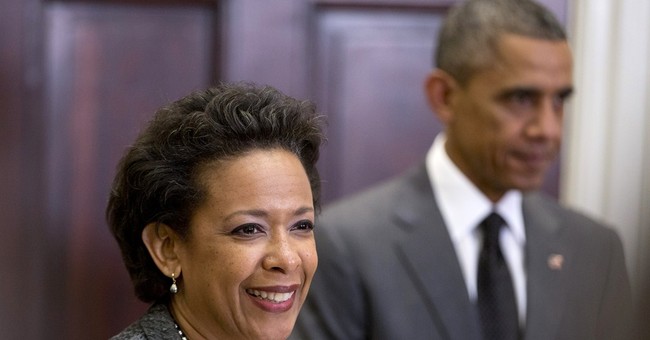 Over the weekend President Obama finally named and nominated a replacement for outgoing Attorney General Eric Holder. U.S. Attorney and Harvard graduate Loretta Lynch will face tough questions from Senators sometime in the near future in order to become the nation's top law enforcement officer.

"It’s pretty hard to be more qualified for this job than Loretta. Throughout her 30-year career, she has distinguished herself as tough, as fair, an independent lawyer who has twice headed one of the most prominent U.S. Attorney’s offices in the country. She has spent years in the trenches as a prosecutor, aggressively fighting terrorism, financial fraud, cybercrime, all while vigorously defending civil rights," Obama said at Lynch's nomination ceremony Saturday. "A graduate of Harvard College and Harvard Law School, Loretta rose from Assistant U.S. Attorney in the Eastern District of New York to Chief of the Long Island Office, Chief Assistant U.S. Attorney, and U.S. Attorney. She successfully prosecuted the terrorists who plotted the bomb -- plotted to bomb the Federal Reserve Bank and the New York City subway. She has boldly gone after public corruption, bringing charges against public officials in both parties. She’s helped secure billions in settlements from some of the world’s biggest banks accused of fraud, and jailed some of New York’s most violent and notorious mobsters and gang members."


Democrats and the President want to rush through the nomination process in order to get Lynch confirmed by the end of the lame duck session and before control of the Senate is turned over to Republicans in January. Meanwhile, Republicans like John Thune, Ted Cruz and Mike Lee have stressed the need to go through Lynch's nomination process carefully considering how high profile and important the Attorney General position is for the country.

“President Obama’s Attorney General nominee deserves fair and full consideration of the United States Senate, which is precisely why she should not be confirmed in the lame duck session of Congress by senators who just lost their seats and are no longer accountable to the voters. The Attorney General is the President's chief law enforcement officer. As such, the nominee must demonstrate full and complete commitment to the law. Loretta Lynch deserves the opportunity to demonstrate those qualities, beginning with a statement whether or not she believes the President’s executive amnesty plans are constitutional and legal," Cruz and Lee released in a joint statement.

Regardless of how the nomination process pans out, under Obama and Holder's tenure law enforcement agencies across the country have lost trust in the Department of Justice after a number of instances where police have been unfairly targeted and smeared by those working within it. There are many examples going back to early 2009 when President Obama said Cambridge Police Officer Sgt. James Crowley "acted stupidly" after properly arresting Professor Henry Louis Gates Jr., the nomination of cop killer advocate Debo Adegbile to head up the Civil Rights Division, DOJ essentially classifying Ferguson Officer Darren Wilson guilty of murder in the Michael Brown killing despite a lack of indictment from a Grand Jury, intense retaliation of law enforcement agents exposing corruption inside the Department and more.

If Lynch is confirmed, former FBI assistant director under Holder and President of the Law Enforcement Legal Defense Fund Ron Hosko is calling on her to repair the "rift" between DOJ and those serving in law enforcement.

"It is my sincere hope that Ms. Lynch, if confirmed, will take immediate steps to begin repairing the rift created between the Obama Administration and the dedicated men and women of America’s law enforcement community," Hosko said in a statement. “The mere replacement of the attorney general is not enough. President Obama should demonstrate a recommitment to the rule of law and a retreat from words and actions that signal a distrust of our law enforcement professionals. Early in his tenure and with no understanding of the underlying facts, he accused police of ‘acting stupidly’ in an engagement with a Harvard University professor, only to later learn of details that supported the police response. More recently, he sent three White House representatives to the funeral of Michael Brown, a young man who had just robbed a store and who reports suggest violently assaulted a police officer in an attempt to disarm him. By these words and actions, the president questions legitimate law enforcement authority, encouraging like-minded people to do the same, and widening the divide between police and the people they serve."

“We look forward to Loretta Lynch’s confirmation hearings to become the attorney general, but there’s no time to rejoice – significant damage has been done and there is much work ahead to undo it. The Law Enforcement Legal Defense Fund stands ready to support important discussions between police and the Obama Administration to rebuild the trust that has so obviously been lost,” Hosko continued.

During confirmation hearings Lynch is sure to receive questions about the damaged relationship DOJ and the White House have created with law enforcement and she'll no doubt be asked about how she plans to productively rebuild that relationship moving forward.


Editor's note: Hosko's last name was incorrectly written once as Hoski in this post. The typo has been corrected.